Audiobook Review: Deliver Us From Evil by David Baldacci 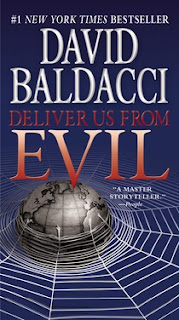 Title:  Deliver Us From Evil


Here is a summary of the book from the Hachette website:

In South America a 96-year-old man of great wealth reads a book late one night and an hour later he lies dead in his bed, the secrets of his past starkly revealed. Six months later another mystery man lies dead at the bottom of his pool in a villa in Provence. This time, however, there's a witness at the scene: Shaw, the shadowy operative from The Whole Truth, who barely escapes with his life. Meanwhile, a half a world away, photojournalist Katie James is working on a story of international importance. But shortly after her meeting with a potential inside source, she is smuggled unconscious onto an airplane headed to an undisclosed destination. In the days to come, Katie and Shaw will be reunited in a deadly duel of nerve and wits against a surprising, secretive enemy and led around the world at a breakneck pace. Filled with the kind of breathtaking plot turns and remarkable characters that only David Baldacci can deliver, it will be the most explosive thriller of the year.

My Review:
This was an awesome book to listen to and it had me hooked from the opening scene.  McClarty does  a great job of narrating this action packed story that takes us through another of Shaw's assignments.  Little does Shaw know that another organization is tracking the same villain, but for a totally different purpose.

I enjoyed this audio so much that I went to see if I missed any other books that are part of the series.  At this time, the only other book with Shaw is The Whole Truth, which I also listened too, but enjoyed Deliver Us From Evil much more.  You can also read my review of The Whole Truth here if you are interested.

Shaw and his men are tracking down Waller, hoping to put an end to his part in a human trafficking ring.  During his assignment he crosses paths with Reggie and her crew who are tracking a man named Kuchen, for war crimes he was never convicted for.  Reggie has made a career of this, and cannot anticipate the monster that Kuchen really is.

I feel I should warn you that Kuchen truly is a monster.  There are torture scenes in this novel unlike any I have read previously.  And maybe that is because I don't usually read this genre, but they were very graphic, leaving me gripping my steering wheel and screaming down the highway like a nutjob.

Without giving too much away I will tell you Shaw and Reggie join forces to get their villain.  This book not only contains plenty of action, but even a little bit of romance.  And I think I also have to admit I developed quite a crush on Shaw.  I mean who wouldn't, with a 6'6" package of muscled man that also has a soft side?  I don't hesitate in recommending the audioversion of this novel.

My mom and I listened to this on driving from Seattle to Wenatchee and enjoyed it! I hope Shaw returns in another book!

It's been too long since I've read Balducci! Looks like a winner.