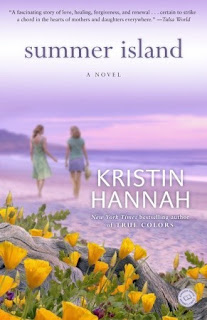 Here is a summary of the book from the author's website:

Years ago, Nora Bridge walked out on her marriage and left her daughters behind. She has since become a famous radio talk-show host and newspaper columnist beloved for her moral advice. Her youngest daughter, Ruby, is a struggling comedienne who uses her famous mother as fuel for her bitter, cynical humor. When the tabloids unearth a scandalous secret from Nora's past, their estrangement suddenly becomes dramatic: Nora is injured in an accident and a glossy magazine offers Ruby a fortune to write a tell-all about her mother. Under false pretenses, Ruby returns home to take care of the woman she hasn't spoken to for almost a decade.

Nora insists they retreat to Summer Island in the San Juans, to the lovely old house on the water where Ruby grew up, a place filled with childhood memories of love and joy and belonging. There Ruby is also reunited with her first love and his brother. Once, the three of them had been best friends, inseparable. Until the summer that Nora had left and everyone's hearts had been broken. . . .

What began as an expose evolves, as Ruby writes, into an exploration of her family's past. Nora is not the woman Ruby has hated all these years. Witty, wise, and vulnerable, she is desperate to reconcile with her daughter. As the magazine deadline draws near and Ruby finishes what has begun to seem to her an act of brutal betrayal, she is forced to grow up and at last to look at her mother--and herself--through the eyes of a woman. And she must, finally, allow herself to love.

My Review:
I was in desperate need of an audiobook so I stopped at the library one evening on my way home and was urged to pick up Summer Island by Kristin Hannah.  A few of the ladies in my book club have read a bunch of Hannah's books, while I've only read a couple, so I thought I would try another.  I did find enjoyment from the audioversion, but I can't say I am going to go on a quest tomorrow to read more of her books.

A rift was created between Nora and Ruby the day Nora walked out on her family many years ago.  Ruby retreated to San Francisco in hopes of starting her career as a comedy writer.  That became pretty much hopeless once her reputation was established, whereas no-one would even contact her for small one-line acting jobs.

Nora is a successful radio talk-show host known for giving knowledgeable advice.  Things go awry for her career when photographs are revealed of her in compromising positions during the time she would have been married.  Her fans can't help but wonder who they are getting advice from if she was having an affair while she was married.

In an effort to steer clear of the media, Nora heads to the family cottage on Summer Island.  But after her accident she can't stay there alone, so she pleads with Ruby to join her on the island to offer her assistance when needed.  Surprisingly, Ruby agrees, which puts them on a path to understanding each other and the decisions they made that have left wounded hearts along the way.

Besides the family drama in this novel, there is also a love story weaved into the storyline.  This part was predictable to me and may be why I didn't like the book as much as others may have.  I can't say I was overly impressed with Bean's narration of the novel either.   With themes of love, forgiveness, family, and illness, this book does have a lot to offer.  Although I didn't love it, the audio was entertaining and I do recommend it for those that are looking for a lighter read or fans of Kristin Hannah.

Disclosure:  I borrowed this book from the public library for my own entertainment.
Posted by Jo-Jo at 6:55 AM

I've never read her work but my sister says it should be sold with a box of tissues. Sorry you didn't love this one more.

I am a huge fan of Joyce Bean as a narrator, so I'd probably pick this audiobook up. I've read quite a few of Kristin's books, but not this one.

I guess I'm not surprised it wasn't super fantastic. I read one of her books and thought it was okay.