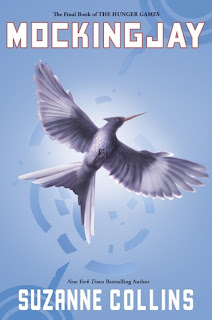 Here is a summary of the book from the Gooodreads website:

Katniss Everdeen, girl on fire, has survived, even though her home has been destroyed. Gale has escaped. Katniss's family is safe. Peeta has been captured by the Capitol. District 13 really does exist. There are rebels. There are new leaders. A revolution is unfolding.

It is by design that Katniss was rescued from the arena in the cruel and haunting Quarter Quell, and it is by design that she has long been part of the revolution without knowing it. District 13 has come out of the shadows and is plotting to overthrow the Capitol. Everyone, it seems, has had a hand in the carefully laid plains--except Katniss.

The success of the rebellion hinges on Katniss's willingness to be a pawn, to accept responsibility for countless lives, and to change the course of the future of Panem. To do this, she must put aside her feelings of anger and distrust. She must become the rebels' Mockingjay--no matter what the personal cost.

My Review:
Mockingjay was a fitting end to an amazing series.  Not wanting to put this series in my past, I held off on listening to the final book for as long as I could.  Once I started, I could tell that this installment would give me a satisfying closure for the trilogy.

Katniss gets caught up with the rebel alliance that is located at District 13.  Her family and Gayle are with her, but her thoughts are filled with Peeta every day.  The Capitol captured Peeta after the jumbled Quarter Quell and have been holding him hostage.  Katniss knows that his life hangs in the balance every moment he is in their custody.

After much persuasion, Katniss agrees to become the face of the Mockingjay, satisfying all the residents of Panem that are in support of the revolution.  A big driving force for Katniss fulfilling this role is the knowledge that one day she will have the opportunity to be alone with President Snow, at which time she will be in  control of his demise.

I don't think I've given any important details away.  Of course Katniss's romantic life is still in turmoil throughout most of the book, as she struggles to find out who truly owns her heart.  This will also be resolved by the end of the book, but I'm not going to tell you who she chooses!  This is a series that I didn't think I would enjoy, but SURPRISE, I loved it!  With themes of love, friendship, and survival, there is much in these books to ponder.  I don't know if I would necessarily suggest these books as a book club selection, but I don't hesitate in recommending the entire series for leisure reading.

Disclosure:  I borrowed this audiobook from  the library to listen for my own entertainment.
Posted by Jo-Jo at 7:30 AM

The details are sketchy. I read this one so long ago but I remember feeling as if this last book was a bit of a cop out. The ending, didn't fit Katniss' personality.

Ti: I bet I would have agreed with you if I had actually "read" the book. I honestly think I form different opinions when I listen to books than I would otherwise...I'm an odd duck! lol