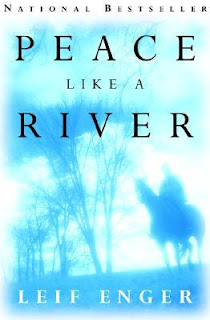 Leif Enger's debut is an extraordinary novel—an epic of generosity and heart that reminds us of the restorative power of great literature. The story of a father raising his three children in 1960s Minnesota, Peace Like a River is at once a heroic quest, a tragedy, a love story, and a haunting meditation on the possibility of magic in the everyday world.

Raised on tales of cowboys and pirates, eleven-year-old Reuben Land has little doubt that miracles happen all around us, and that it's up to us to "make of it what we will." Reuben was born with no air in his lungs, and it was only when his father, Jeremiah, picked him up and commanded him to breathe that his lungs filled. Reuben struggles with debilitating asthma from then on, making him a boy who knows firsthand that life is a gift, and also one who suspects that his father is touched by God and can overturn the laws of nature.

The quiet Midwestern life of the Lands is upended when Davy, the oldest son, kills two marauders who have come to harm the family; unlike his father, he is not content to leave all matters of justice in God's hands. The morning of his sentencing, Davy—a hero to some, a cold-blooded murderer to others—escapes from his cell, and the Lands set out in search of him. Their journey is touched by serendipity and the kindness of strangers—among them a free spirit named Roxanna, who offers them a place to stay during a blizzard and winds up providing them with something far more permanent. Meanwhile, a federal agent is trailing the Lands, convinced they know of Davy's whereabouts.

With Jeremiah at the helm, the family covers territory far more extraordinary than even the Badlands where they search for Davy from their Airstream trailer. Sprinkled with playful nods to biblical tales, beloved classics such as Huckleberry Finn, the adventure stories of Robert Louis Stevenson, and the westerns of Zane Grey, Peace Like a River unfolds like a revelation.

My Review:
I read this book with my book club and I can tell you that since I didn't like his other book, So Brave, Young, and Handsome, I probably wouldn't have picked this one up on my own.  I'm glad I did though, because Enger brought us along on a miracle filled journey for young Reuben and his family.

Reuben is the narrator of the novel and it was interesting to see things from his young and innocent perspective.  Even when Reuben sees his older brother Davy kill in cold blood, his innocent mind allows him to believe that Davy did no wrong.  In an attempt to escape conviction, Davy flees his home and family on a quest for his freedom.  Davy's escape sets the tone for the novel, when afterwards his father packs up their belongings in a recently acquired Airstream trailer, and toting along Reuben and his sister, leaving their home in the Minnesota plains to head for the Badlands of North Dakota.  This is where they believe they will find Davy.

Miracles keep happening along their journey that really are unexplainable.  They seem to be making headway until they finally stop for gas close to their destination, and meet a woman named Roxanna.  Roxanna is a gracious woman who opens her heart and home to this family in need.  In time she seems to be the link that could make the Land family complete.

This was a very descriptive novel making it easy to create images of the scenes while reading.  I think my biggest problem with the book is that although it takes place in the 60's, it seemed to have an old western feel to it.  I quite often felt like I was watching an old western cowboy movie unfold before my eyes.  I didn't like watching these movies with my grandparents when I was young, so I didn't appreciate that tone in this novel.

Besides the western tone to the book, I have to admit that I found it enjoyable for the most part.  With themes of family, and miracles, and the age old battle between good and evil, I'm sure many of you will love it.  It made for an interesting book club discussion so I don't hesitate in recommending this novel for any book group out there.

Disclosure:  This book is from my personal collection and I read it for my own entertainment and as a book club selection.

I think my son read this in high school. I'll have to see if we have a copy of the book somewhere - it sounds good to me.