Here is what I found:

From Amy at Passages to the Past I found Signora da Vinci by Robin Maxwell. 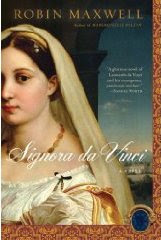 Here is a brief summary of Signora da Vinci from Penguin Group:
Caterina was fifteen years old in 1452 when she bore an illegitimate child in the tiny village of Vinci. His name was Leonardo, and he was destined to change the world forever.

Caterina suffered much cruelty as an unmarried mother and had no recourse when her boy was taken away from her. But no one knew the secrets of her own childhood, nor could ever have imagined the dangerous and heretical scheme she would devise to protect and watch over her remarkable son. This is her story.

Since I am reading Peony in Love I also stopped over at Lisa See's website because this novel is raising so many questions for me. She really is a very gifted and talented author so when I saw that she has a new novel coming out in May titled Shanghai Girls I decided that I will definitely have to read it!

Isn't this a beautiful cover? The following is a summary from her website:
In 1937, Shanghai is the Paris of Asia, full of great wealth and glamour, home to millionaires and beggars, gangsters and gamblers, patriots and revolutionaries, artists and warlords. Twenty-one-year-old Pearl Chin and her younger sister May are having the time of their lives, thanks to the financial security and material comforts provided by their father’s prosperous rickshaw business. Though both wave off authority and traditions, they couldn’t be more different. Pearl is a Dragon sign, strong and stubborn, while May is a true Sheep, adorable and placid. Both are beautiful, modern, and living the carefree life ... until the day their father tells them that he has gambled away their wealth, and that in order to repay his debts he must sell the girls as wives to suitors who have traveled from Los Angeles to find Chinese brides.

At its heart, Shanghai Girls is a story of sisters: Pearl and May are inseparable best friends, who share hopes, dreams, and a deep connection. But like sisters everywhere, they also harbor petty jealousies and rivalries. They love each other but they also know exactly where to drive the knife to hurt the other sister the most. Along the way there are terrible sacrifices, impossible choices and one devastating, life-changing secret, but through it all the two heroines of this astounding new novel by Lisa See hold fast to who they are – Shanghai girls.
Posted by Jo-Jo at 2:01 PM

Hi Jo-Jo! I was intrigued with Signora da Vinci too, I really want to read this one.

I've been seeing Lisa See's name all over the place. I'm starting to get curious too! LOL!

I'm on the hunt for good books to present to my bookclub and you have a couple there.
Thanks for the encouragement about my class...it starts next week.

I am hoping to start the Robin Maxwell book any day now, and I am looking forward to it!

If you are quick, we are giving away a copy of it over at Historical Tapestry.

I can not tell you how excited I am at the prospect of a new Lisa See book! I don't know how I missed that it was coming. Thanks for letting us know about it.

Marg: Thanks for the heads up!

Hi there... I want to read that Signora Da Vinci... oooo.. chompin to read it... :) I loved The Snow Flower and the Secret of the Fan. I will have to check out other Lisa See books.

I just read Snow Flower & The Secret Fan. I will be reviewing Peony and Shanghai. My post on Lisa See is coming tomorrow. Check it out!