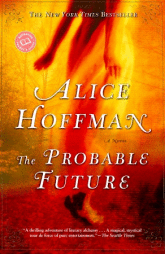 The following is a summary from Random House of The Probable Future by Alice Hoffman:

The women of the Sparrow family have lived in New England for generations. Each is born in the month of March, and at the age of thirteen, each develops an unusual gift. Elinor can literally smell a lie. Her daughter, Jenny, can see people’s dreams as they’re dreaming them. Granddaughter Stella, newly a teen, has just developed the ability to see how other people will die. Ironically, it is their gifts that have kept Elinor and Jenny apart for the last twenty-five years. But as Stella struggles to cope with her disturbing clairvoyance, the unthinkable happens: One of her premonitions lands her father in jail, wrongly accused of homicide. The ordeal leads Stella to the grandmother she’s never met and to Cake House, the Sparrow ancestral home full of talismans and fraught with history. Now three generations of estranged Sparrow women must come together to turn Stella’s potential to ruin into a potential to redeem.

My Review:
I haven't read Alice Hoffman for quite awhile, and I must admit that I really didn't know much about this book when I picked it up a couple of years ago. I have read a couple of her books in the past and have enjoyed them, but quite honestly when I first started this book I found myself not enjoying it as I have enjoyed her previous novels.

As you can see from the summary, all of the women born into the Sparrow family develop a special gift, or power one might say, that is revealed on their 13th birthdays. This was introduced in the beginning of the book and since I didn't think of this as a very realistic probability within a family I was kind of turned off in the beginning. I did get past that because while I was reading the novel I happened to remember a couple of stories where similar instances of inheriting psychic gifts have been reported. How true these stories are, or not, are not really up to me to challenge. So I just reminded myself that this is a fictional story and left it at that.

One of the major themes of this story is how the mother/daughter relationship seems to be strained within this family of women, generation after generation. As soon as Jenny is able, she leaves her heritage home called Cake House to try to lead a somewhat normal life with her new family. Jenny wanted to get as far away from her mother as she could, just as Stella tried to get away from her mother later. Jenny thinks that she has met and married the man of her dreams, only to have the relationship end in divorce years later.

When Jenny's daughter Stella turns 13, Stella learns that her special gift is being able to see how people will die. When Stella tries to warn a stranger of her fatal demise, her father ends up being caught up in the cross-fire and is blamed for the crime. In an attempt to protect her daughter, Jenny decides that Stella should go back to the heritage home and reside at Cake House until the crime is solved.

Throughout the novel the women end up back at Cake House living together, overcoming their differences as they learn to appreciate each other all over again. New friendships and relationships are formed as old ones are renewed. I must admit that since I also had a strained relationship with my mother for many years that this book really hit home for me. I don't know why I keep reading books like that lately, but it seems like I always need a tissue!

So although I did not start out enjoying this book, I did grow to appreciate it, especially for the family relationships. Most of the characters had positive changes concerning romantic relationships that were fun to watch develop. It was not my favorite book that I have read by Alice Hoffman, but if you enjoy reading books that include some paranormal themes, you may enjoy it.
Posted by Jo-Jo at 12:13 PM

It's been a long time since I've read any of Alice Hoffman's work, too. Great review!

I've got a couple of Alice Hoffman's books, but I haven't gotten around to reading them yet. Maybe I should! This one sounds really great from your review. I'm intrigued!

I love every book that Alice Hoffman writes. She is a New England writer.
She typically writes with a ghostly mystical feel. Did you ever read Anita Sherve" Weight of Water". Don't see the movie but the book was good. This one of my first book club books when I first started in book clubs. Another one is Alias Grace. Thanks for following my blog
I thought I would take a gander at yours.