Here is what I found this week:

From Book Chatter and Other Stuff I found Handle With Care by Jodi Picoult. 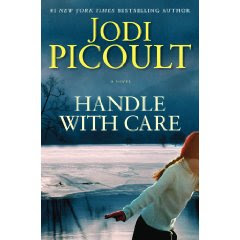 Here is a summary of Handle With Care from Jodi Picoult's website:
When Charlotte and Sean O’Keefe’s daughter, Willow, is born with severe osteogenesis imperfecta, they are devastated – she will suffer hundreds of broken bones as she grows, a lifetime of pain. As the family struggles to make ends meet to cover Willow’s medical expenses, Charlotte thinks she has found an answer. If she files a wrongful birth lawsuit against her ob/gyn for not telling her in advance that her child would be born severely disabled, the monetary payouts might ensure a lifetime of care for Willow. But it means that Charlotte has to get up in a court of law and say in public that she would have terminated the pregnancy if she’d known about the disability in advance – words that her husband can’t abide, that Willow will hear, and that Charlotte cannot reconcile. And the ob/gyn she’s suing isn’t just her physician – it’s her best friend.

Handle With Care explores the knotty tangle of medical ethics and personal morality. When faced with the reality of a fetus who will be disabled, at which point should an OB counsel termination? Should a parent have the right to make that choice? How disabled is TOO disabled? And as a parent, how far would you go to take care of someone you love? Would you alienate the rest of your family? Would you be willing to lie to your friends, to your spouse, to a court? And perhaps most difficult of all – would you admit to yourself that you might not actually be lying?

This book will not be available until March 3, 2009, but I will certainly be watching for it!

Another book that caught my attention this week is The White Tiger by Aravind Adiga from Ramya's Bookshelf. 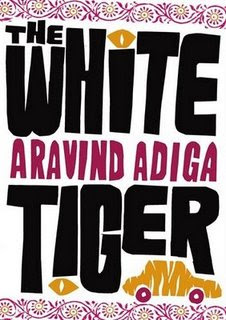 Here is a summary of The White Tiger from the Simon and Schuster
website:
Introducing a major literary talent, The White Tiger offers a story of coruscating wit, blistering suspense, and questionable morality, told by the most volatile, captivating, and utterly inimitable narrator that this millennium has yet seen.

Balram Halwai is a complicated man. Servant. Philosopher. Entrepreneur. Murderer. Over the course of seven nights, by the scattered light of a preposterous chandelier, Balram tells us the terrible and transfixing story of how he came to be a success in life -- having nothing but his own wits to help him along.

Born in the dark heart of India, Balram gets a break when he is hired as a driver for his village's wealthiest man, two house Pomeranians (Puddles and Cuddles), and the rich man's (very unlucky) son. From behind the wheel of their Honda City car, Balram's new world is a revelation. While his peers flip through the pages of Murder Weekly ("Love -- Rape -- Revenge!"), barter for girls, drink liquor (Thunderbolt), and perpetuate the Great Rooster Coop of Indian society, Balram watches his employers bribe foreign ministers for tax breaks, barter for girls, drink liquor (single-malt whiskey), and play their own role in the Rooster Coop. Balram learns how to siphon gas, deal with corrupt mechanics, and refill and resell Johnnie Walker Black Label bottles (all but one). He also finds a way out of the Coop that no one else inside it can perceive.

Balram's eyes penetrate India as few outsiders can: the cockroaches and the call centers; the prostitutes and the worshippers; the ancient and Internet cultures; the water buffalo and, trapped in so many kinds of cages that escape is (almost) impossible, the white tiger. And with a charisma as undeniable as it is unexpected, Balram teaches us that religion doesn't create virtue, and money doesn't solve every problem -- but decency can still be found in a corrupt world, and you can get what you want out of life if you eavesdrop on the right conversations.
Posted by Jo-Jo at 2:10 PM

I noticed the Picoult novel on Ti's blog too! (Although I'm not sure I'm a Picoult fan, actually.)

The White Tiger won the Booker last year, so I'm curious about it as well!

I'm looking forward to the new Picoult book. I know a lot of people don't like her work, but I do.

I'd like to read both of these books too Jo-Jo. Eventually anyway. lol.

You know I've never read any of Picoult's book but her novels are very popular. Been wanting to read The White Tiger because it won the Booker awards last year but I have to many on my TBR pile already, so I guess the book will just have to wait for now.

I am a Piccoult fan even though I have only read about 5 of her books... can't wait for this one.

Avis and Ulat: I just love reading these books about India...I haven't been there myself but after reading a couple of books set in that country I have a pretty good visual.

Kathy, Dar & Toni: I have only read a couple of Picoult's books, so I don't know if I would be considered a fan either! I have heard mixed reviews on a couple of her books, so those were added to the bottom of my pile. This one sure sounds good though!

I got my hands on this copy a couple weeks ago and can't wait to read it.
Also you left a comment on my blog about my giveaway. I decided to extend it for another week. If you would like to enter feel free to leave a comment. Would you please put the word out I did not have a great response. Perhaps it is because I did not ask for everyone to leave a leave back to my blog. I am going to have to change the contest to include this.

hello jo-jolovestoread.blogspot.com blogger discovered your site via search engine but it was hard to find and I see you could have more visitors because there are not so many comments yet. I have discovered website which offer to dramatically increase traffic to your blog http://traffic-for-your-website.com they claim they managed to get close to 4000 visitors/day using their services you could also get lot more targeted traffic from search engines as you have now. I used their services and got significantly more visitors to my blog. Hope this helps :) They offer most cost effective services to increase website traffic at this website http://traffic-for-your-website.com
To your success James