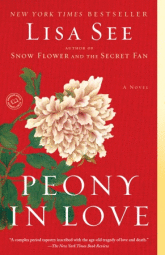 The following is a summary of Peony in Love by Lisa See from the Random House website.

“I finally understand what the poets have written. In spring, moved to passion; in autumn only regret.”

For young Peony, betrothed to a suitor she has never met, these lyrics from The Peony Pavilion mirror her own longings. In the garden of the Chen Family Villa, amid the scent of ginger, green tea, and jasmine, a small theatrical troupe is performing scenes from this epic opera, a live spectacle few females have ever seen. Like the heroine in the drama, Peony is the cloistered daughter of a wealthy family, trapped like a good-luck cricket in a bamboo-and-lacquer cage. Though raised to be obedient, Peony has dreams of her own.

Peony’s mother is against her daughter’s attending the production: “Unmarried girls should not be seen in public.” But Peony’s father assures his wife that proprieties will be maintained, and that the women will watch the opera from behind a screen. Yet through its cracks, Peony catches sight of an elegant, handsome man with hair as black as a cave–and is immediately overcome with emotion.

So begins Peony’s unforgettable journey of love and destiny, desire and sorrow–as Lisa See’s haunting new novel, based on actual historical events, takes readers back to seventeenth-century China, after the Manchus seize power and the Ming dynasty is crushed.

Steeped in traditions and ritual, this story brings to life another time and place–even the intricate realm of the afterworld, with its protocols, pathways, and stages of existence, a vividly imagined place where one’s soul is divided into three, ancestors offer guidance, misdeeds are punished, and hungry ghosts wander the earth. Immersed in the richness and magic of the Chinese vision of the afterlife, transcending even death, Peony in Love explores, beautifully, the many manifestations of love. Ultimately, Lisa See’s new novel addresses universal themes: the bonds of friendship, the power of words, and the age-old desire of women to be heard.

I have been pondering this book for a couple of days considering how I can give a thorough review of it without revealing the whole plot to you. I will start by saying that this book had my emotions all over the place. I started out loving it, after about the one-third mark I really was very upset with it, and then at about the halfway point I fell in love with it even more. Like that really helped, right?

Lisa See is a very talented author that really gives us a glimpse of what it was like during the 1600's for Chinese women. She really has a magical way of describing the traditions and cultural beliefs in her novels. Just as Snow Flower and the Secret Fan focused on one girl's life, so does Peony in Love, but Lisa See does this in a different way by showing us another realm in the Chinese beliefs.

During this time period of Chinese culture, marriages were arranged between the parents, and many times the betrothed did not see each other until their wedding day. Because of this practice many young maidens could only dream of true love, and their dreams were fueled by the story of The Peony Pavillion, which is a famous Chinese opera. It is important to remember that girls were not encouraged to read, so if they did learn how to read, the books that were available to them were limited. Peony's father was very happy that his daughter could read so she would be able carry on intelligent conversations with her husband when she married, and also teach her sons how to read. The only books that Peony actually owned were commentaries on The Peony Pavillion, so as her arranged wedding day drew closer she engulfed herself in these books in the hope that true love will reign in the end. A doctor was called several times on Peony's behalf only to diagnose her with lovesickness. I found it very interesting that when Lisa See researched for this book she found that lovesickness was a very common diagnosis that claimed many young maidens lives.

The strong voice of women and mother/daughter relationships were a very important part of this novel. Peony does not get to see the personal side of her mother until later in the novel, but when she learns of her mother's loves and desires, it is inspiring. Peony's mother was persistent in teaching her the Four Virtues and the Three Obediences, but she really did not take the opportunity to build a relationship with her. When it was brought to Peony's attention that her mother at one time enjoyed reading and writing as much as she did, you could see that Peony really developed a new respect and admiration for her.

There were several parts of the novel that included groups of women getting together and discussing commentaries or poetry that they wished to have published. The Three Wives Commentary that is revealed towards the end of the novel is an actual commentary about The Peony Pavillion that was published. It seemed to be quite common for family members to publish women's writing projects after their deaths. I find it odd that if it were good enough to publish after they were dead, why they couldn't go public with their writing when they were alive. I know the answers but I don't have to agree with them!

Lisa See also shows us the various stages of the afterlife, which is very descriptive. I must admit that at first I really had a problem with this part of the book. I had to remind myself that this is the Chinese culture and this is what they believe in. Lisa See is just trying to give us a glimpse into that belief. I read the interview in the back of my book after I was done with it-wishing I had read it first, because it really helped to open my mind. Here is what Lisa had to say about the Chinese belief of death:

My point here is that other countries and cultures have different belief systems. One isn't right and the other wrong, although certainly wars and even personal arguments are fought all the time over whose religion is right.

As I said earlier, I really loved this novel but know that it is not for everyone. This is our book club selection for January and I know that quite a few of the ladies did not enjoy it, but we will see what their thoughts are after we discuss it. Many times we find a new appreciation of a book after we talk about it-and I know this one will spark a lot of discussion! A Novel Menagerie just posted an excellent review of Snow Flower and the Secret Fan here that may also interest you. You can also check out Lisa See's website for a complete list of books she has written and a peek into her newest novel Shanghai Girls.

I will cross reference this review with mine when I get done!

Lisa See has a new novel coming out called Shanghai Sisters I believe it is called.

GReat review Jo-Jo. I have this on my shelf along with her other novel. I've been seeing a few reviews lately and it's really making me want to dive into them especially after getting a taste of the Chinese culture in My Splendid Concubine.

Great review! I've had my eye on this one for awhile.