Giveaway: Kissing Gaves of the World by Sandi Kahn Shelton 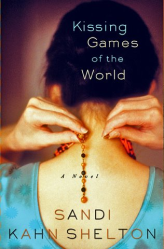 Thanks to the generosity of Random House I have the opportunity to give away three copies of Kissing Games of the World by Sandi Kahn Shelton!

Here is a summary about the book if it is new to you:

If there’s one point that Jamie McClintock and Nate Goddard can agree upon, it’s that love is overrated. Jamie doesn’t have time for it. Nate doesn’t need it. And they certainly don’t want it from each other.

Jamie, a struggling free-spirited artist, is a devoted single mother who hasn’t been in a serious relationship since her boyfriend abandoned her after their son was born. Nate, a charismatic jet-setting salesman, is widowed and estranged from his father and five-year-old son, Christopher. Jamie would rather glue glitter to pinecones than go out on a date. Nate spends most of his nights wooing his clients. Then one afternoon Nate’s father drops dead of a heart attack. In that moment, their highly guarded worlds collide.

When Nate shows up at his childhood home to settle the estate and reclaim his son, he discovers that Jamie has been living in the Connecticut farmhouse as his father’s roommate. Mistrustful of each other’s motives, Nate and Jamie bicker about everything from children’s nicknames to Jamie’s fashion choices to Nate’s home renovation methods. It doesn’t help that Christopher prefers Jamie to his absentee father.

But after the funeral, Nate and Jamie begin to see each other in a more forgiving light. Nate, traveling to sales conferences all over the country with a sullen Christopher in tow, learns he can’t breeze his way through single parenthood. Jamie, who has moved back in with her sister, wonders at the wisdom of her unconventional choices as a woman with a child to support. And both begin to realize they don’t know as much about love as they thought. Still wounded by past heartbreak and sorrow, can they learn to trust each other and open their hearts?

Now let's get on with the Giveaway!

To enter this contest you must be at least 18 and have a U.S. address(my apologies to the international readers.)  No PO Boxes Please!

You will have until November 30th to enter and I will draw for a winner on December 1st.
Posted by Jo-Jo at 5:34 PM

I would love to be entered in this giveaway! Thanks! milou2ster(at)gmail.com

Oh, this one sounds great!! Please enter me in the contest..

I would love to be entered in this giveaway...thanks.

I have been wanting to read this one!

This book looks great!
+2 It's in my sidebar under The Contest List
http://brizmusblogsbooks.blogspot.com
+1 zedster.tbb(at)gmail(DOT)com

Please enter me for this one! Thanks.

Posted this on my blog:

I just added this book to my Wish List yesterday. Please count me in on this one. Thanks so much for the giveaway!

I have also added a link in my sidebar:http://thereadingjourney.blogspot.com

Oh, I really want to read this one! Thanks for the chance to win a copy!

Blogged about this giveaway here:
http://aseaofbooks.blogspot.com/2009/11/giveaways.html

This book sounds wonderful. Please enter me.
Thanks

This looks fantastic - count me in :)

I blogged about your giveaway - linked her to my name

This looks like a great book! I'd love to win!

Wow, I really love that cover! I saw it first on Alyce's blog!

Love a chance to win - please enter me.
pbclark(at)netins(dot)net

This sounds like a good one--please enter me in the contest.
Donna
dcompton@centurytel.net

I would LOVE to win this one. Thanks for the giveaway.

Kissing Games of the World by Sandi Kahn Shelton sounds wonderful.Please enter me in the giveaway.augustlily06(at)aim(dot)com.Thank you.

I would really love to read this book. Please enter me. Thanks!

This sounds like a captivating story! Please include me in your giveaway.

Please include me in your drawing.
Thanks!
mtakala1 AT yahoo DOT com

Would love to win this!

Please enter me in this giveaway!

Please enter me. Thanks!
kristinemarie7 at gmail.com

I also added it to the sidebar on my blog..
kristinemarie7 at gmail.com