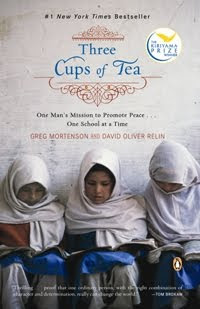 Here is a summary of Three Cups of Tea: One Man's Mission to Promote Peace...One School at a Time from the Penguin website:

The inspiring account of one man's campaign to build schools in the most dangerous, remote, and anti-American reaches of Asia.


In 1993 Greg Mortenson was the exhausted survivor of a failed attempt to ascend K2, an American climbing bum wandering emaciated and lost through Pakistan’s Karakoram Himalaya. After he was taken in and nursed back to health by the people of an impoverished Pakistani village, Mortenson promised to return one day and build them a school. From that rash, earnest promise grew one of the most incredible humanitarian campaigns of our time—Greg Mortenson’s one-man mission to counteract extremism by building schools, especially for girls, throughout the breeding ground of the Taliban.

Award-winning journalist David Oliver Relin has collaborated on this spellbinding account of Mortenson’s incredible accomplishments in a region where Americans are often feared and hated. In pursuit of his goal, Mortenson has survived kidnapping, fatwas issued by enraged mullahs, repeated death threats, and wrenching separations from his wife and children. But his success speaks for itself. At last count, his Central Asia Institute had built fifty-five schools. Three Cups of Tea is at once an unforgettable adventure and the inspiring true story of how one man really is changing the world—one school at a time.

My Review:
For being a person that does not read much non-fiction because I just don't usually enjoy it, I will tell you that this book gripped my heart and I'm sure it has earned a place in my memory as one of the most important books that I have ever read.   I know there are many missionaries and organizations out there trying to help people in war-tattered and underdeveloped countries, but Mortenson's personal mission seemed to me to be the most unselfish and heartfelt account that I have heard in quite a long time.

It was purely accidental when Mortenson luckily stumbled into the Korphe village in Pakistan.  Exhausted from physical exertion, the people in this village nursed Mortenson back to health.  When he finally awakens from his slumber and starts to spend some time getting to know the villagers he learns that the children come last as far as governmental spending goes.   His heart breaks from the knowledge that the children in this village will never have the opportunity of an education that is so easily given in America.  This starts the beginning of his mission as he promises the Korphe leader, and his new friend, Haji Ali, that he will return to this village to build a school.

Mortenson didn't come from a family blessed with unlimited amounts of money and he worked very hard as a nurse to earn his way.  He returned to the United States so he could work as much as possible to save money for the Korphe school.  He lived in such a frugal manner that he even slept in his car some evenings.  He found himself feeling guilty if he were to spend any of his money on himself rather than saving it for the school.  Even after saving every penny that he is able to earn, he accepts the fact that it will just take too long for him to earn enough money to buy the materials for the school, so he starts to solicit funds from outside organizations.  From his efforts he is able to share his vision with a few individuals that also see the importance of his cause so he is able to return to Pakistan sooner than he had originally expected.

The roadblocks that Mortenson endured along the way could have easily swayed the average person.  I can only imagine how he felt when he returned to Korphe with the ability to build the school, only to learn that before they build the school they have to erect a bridge!  I could feel his frustrations when he learned of this, knowing that his project was going to be postponed for probably a year.  But he seemed to collect his emotions and resolve the matter by figuring out what they needed to do to build a bridge.

We learn a lot about the Balti culture and traditions from Mortenson's experience. Just conducting normal business was so different from the quick customer service that we receive here in the United States.  Haji Ali taught him that it is just as important to build relationships as trying to accomplish daily tasks.  Here is what Haji Ali shared with Mortenson about respecting their ways by sharing three cups of tea from page 150:
"The first time you share tea with a Balti, you are a stranger.  The second time you take tea, you are an honored guest.  The third time you share a cup of tea you become family, and for our family, we are prepared to do anything, even die," he said, laying his hand warmly on Mortenson's own.

Once Mortenson was able to embrace this slow paced way of life, his efforts in the area thrived.  Village leaders seeked out Mortenson hoping that he would want to build a school in their villages.  Mortenson made it quite clear to the Pakistanis that he wasn't looking to change their way of life, but only provide the children with a balanced education.  Here is an excerpt from page 209 that explains why Mortenson thought it so important to educate the girls:
"Once you educate the boys, they tend to leave the villages and go search for work in the cities," Mortenson explains.  "But the girls stay home, become leaders in the community, and pass on what they've learned.  If you really want to change a culture, to empower women, improve basic hygiene and health care, and fight high rates of infant mortality, the answer is to educate girls."

Mortenson was building a school in Pakistan when the attack on the Twin Towers took place on 9/11.  I can only imagine the danger he was in by being an American citizen in that land, but he had built strong relationships with people that were willing to put their lives on the line to protect him if necessary.  Mortenson made a trip to Capitol Hill shortly after 9/11 to share the work that he has been doing and what he had learned about terrorism.  Here is an excerpt from page 292 about what he shared with a congressman:
"I've learned that terror doesn't happen because some group of people somewhere like Pakistan or Afghanistan simply decide to hate us.  It happens because children aren't being offered a bright enough future that they have a reason to choose life over death."

I think I could probably go on about this book all day long, as it really touched my heart in a way that I can't explain.  Mortenson's work continues as he heads the Central Asia Institute that helps to build schools in Afghanistan and Pakistan.  This story brought tears to my eyes as I think of how Morteson put his life on the line to help these children.  If you are interested in learning more about the work that Greg Mortenson has done, please check out the Three Cups of Tea website.

I read this book with my book club and we all were very inspired by it and I would definitely suggest this book for other book groups.  We have been trying to think of a way that we might be able to help Mortenson with his mission so I will be sure to post an update once we make a final decision on that.  I will end this review by saying this is the first non-fiction book that I have absolutely loved and I also want to thank Mr. Mortenson for his continuing and selfless work that he does for these children! 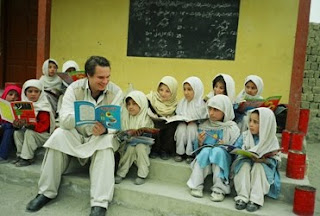 I just had to include this picture of Greg Mortenson reading to the children, because he always has the biggest smile on his face when he is around kids.

Wow!! 5 out of 5! My book group members read this on the side and they loved it. I didn't join in with the side discussion so I can't weigh in but it's gotten many favorable reviews.

I'm impressed! Both you're review and his work. I don't normally read non-fiction either, but this type of story is very inspiring, so I'll be making an exception.
Excellent review Jo-Jo.

Wow, what an awesome post and review!! Loved it!

I've got the audio version of this book. It sounds like I need to get my hubby to put it on my iPod for me. Great review.

I give 5 stars to your review LOL!

I can totally understand how Greg felt guilty to even spend one penny on himself.
This is such a touching review.. i m sure i will get this book for me one of these days.

I liked this book, but did not love it. I'm so happy it was perfect for you. (it was a great story).

in which a girl reads said...

And you've gotten an award at my blog:

I read this a while ago and I loved it too. I just rally was so impressed with Greg's heart and what he was able to do by sharing this passion. All of those schools! Wow!

I've had this book for over a year and needed some inspiration to get going on it. Your review and 5/5 did it. I'm adding it to my 2010 list. Looks like the book will inspire me in other ways as well.