Review: A Change in Altitude by Anita Shreve 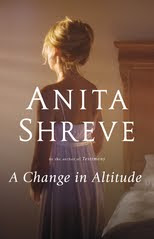 Here is a summary of A Change in Altitude by Anita Shreve from the Hachette Book Group website:

Margaret and Patrick have been married just a few months when they set off on what they hope will be a great adventure-a year living in Kenya. Margaret quickly realizes there is a great deal she doesn't know about the complex mores of her new home, and about her own husband.

A British couple invites the newlyweds to join on a climbing expedition to Mount Kenya, and they eagerly agree. But during their harrowing ascent, a horrific accident occurs. In the aftermath of the tragedy, Margaret struggles to understand what happened on the mountain and how these events have transformed her and her marriage, perhaps forever.

A Change in Altitude illuminates the inner landscape of a couple, the irrevocable impact of tragedy, and the elusive nature of forgiveness. With stunning language and striking emotional intensity, Anita Shreve transports us to the exotic panoramas of Africa and into the core of our most intimate relationships.

My Review:
Before I even read this book, I had already noticed several mixed reviews.  I have found that for the most part, I usually enjoy Shreve's work so I decided to give this one a shot.  Although I will confess that this book wasn't one of my favorites by Shreve, I did find some enjoyment throughout the pages.

Margaret and Patrick are newlyweds that have decided to start their lives off together by spending some time in Africa.  As a doctor Patrick finds himself very busy and working quite long hours, while Margaret is a photojournalist and was not working for quite some time after they arrived in Africa so she found herself getting quite frustrated with her mundane lifestyle.  They don't have many friends in the area, so after being alone all day Margaret is starving for people to be with.  So it really wasn't a surprise when after meeting Arthur and Diana they dive right into a friendship with people they hardly know for the feeling of companionship.

After several outings together, the two couples decide to take on the challenge of climbing Mount Kenya together.  Little do they know that climbing this mountain will change all of their lives forever.  After the tragedy on the mountain they return to their lives in a way that pushes the events of the climb to the far recesses of their minds.  Even though Patrick doesn't want to talk about what happened on the mountain, Margaret is haunted by the memory and can't understand why she can't seem to go on with her life when the others don't seem to have a problem.

One thing that I have always liked about Shreve's writing is that she always seems to spin a story about realistic people.  I can't say that I liked Margaret or Patrick's characters, but I think that is one of the reasons that I did enjoy this book.  In real life I don't like everyone that crosses my path, so why would I expect that in a book?  I do admit that I would have liked to get to know Margaret a bit more throughout the story.  But then when I consider how young Margaret actually was in the story, I can't help but ask myself how much more could she have offered as a character?

Throughout the story Margaret struggles with the guilt that the tragedy on the mountain was her fault.  It doesn't help when her husband openly admits that he also blames her for the events that took place.  For me, this story was about Margaret finding her true self by seeking forgiveness mostly from her own mind and emotions.  It is only when she accepts herself that she will be able to move on and find her place in this world.

I want to thank Miriam from Hachette for providing me a copy of this book in exchange for an honest review. If you are interested in viewing more work by Anita Shreve please check out her website here.

Here are some other reviews that you may want to ponder:
Laura's Reviews
Bibliophile by the Sea
she reads and reads
A Novel Menagerie
Peeking Between the Pages
Posted by Jo-Jo at 1:00 PM

Thanks for linking to my review, Jo-Jo; I just linked to yours as well. I must admit that I have trouble liking books when I don't like the characters, although that wasn't my main problem here. I'm a little bit surprised you rated this book so highly in the end!

Great review! Thanks for linking to my review as well. It's always interesting reading the different opinions of everyone on the same book. I enjoyed the growth of Margaret throughout the novel.

Avis: I kind of went back and forth with rating this novel, and almost didn't do so because of that. But for some reason the story did engage me, so I just went with my gut at the end.

Laura: I also enjoy seeing various opinions of a book. That's what makes it fun!

I am a big fan of Anita Shreve so it is disappointing to find that this book is being reviewed too well. I'm glad you liked it well enough although it wasn't your favorite. I guess they can't all be right?!

Like you, I've read mixed reviews of this one. I suspect that I'll probably enjoy it since I am a Shreve fan.

I'm a huge Shreve fan, but this book disappointed me. Your review was excellent and honest; thanks

When you've got an author that so many people love as much as they do Shreve, it's hard for new books to live up to expectations. But I'm always pretty happy if I can find a book that ranks as a 4/5!

I have not read anything by Shreve and I know it is time to correct this. I really love the way you talk about Margaret and the analysis of her character and what she has to offer!
i will keep this in mind :)

I recently read Anita Shreve's The Pilot's WIfe and liked it very much. Her portrayal of her characters sounds very real and not just made up. They react not like super heroes but like a normal human being. I guess I would want to read more of her books.

Thanks for the review

Great review, I have yet to read a single book by her. Would sure like to try one day

Amy and Lisa: Even though this wasn't one of my favorites I found that I didn't want to put the book down, and I usually consider that when I think about how much I enjoyed the book.

DCMetro: There was really a lot of turmoil that the characters dealt with in this novel.

Kathy: I've found that if I usually like an author's work, I can always find a good element to the story. I think Margarets underlying turmoil is what did it for me in this one.

Veens: She really has a lot of great novels out there. I still haven't read Testimony yet, but my favorites are a toss-up between The Pilot's Wife and Sea Glass.

Shona: I love the human element of her novels. I think that Sea Glass is just as good as The Pilot's Wife...so I've decided not to decide which one of those I like better! lol

Blodeuedd: There are really a lot of great novels to choose from when you are ready to read something by Shreve.

I have enjoyed the few Shreve books I've read, so will probably read this one too, someday. Great review :)

I'm looking forward to reading this one, despite the mixed reviews. Glad you liked it for the most part.

I'm looking forward to reading this

I found this to be one of Shreve's better books. I liked Margaret but couldn't stand Patrick, Arthur, Diana and the Dutch woman. I wished throughout that the protaganist would just tell them all to get lost. She didn't even do anything wrong! I just couldn't stand the attitude of her husband and friends. I liked the ending for two reasons. (I won't give it away). The African setting was absolutely spectacular. I also really liked Body Surfing, Testimony and Eden Close by this same author.