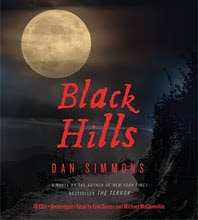 Thanks to Anna from Hachette for offering to give away three Black Hills unabridged audiobooks here at Jo-Jo Loves to Read!!!

When Paha Sapa, a young Sioux warrior, "counts coup" on General George Armstrong Custer as Custer lies dying on the battlefield at the Little Bighorn, the legendary general's ghost enters him - and his voice will speak to him for the rest of his event-filled life.

Seamlessly weaving together the stories of Paha Sapa, Custer, and the American West, Dan Simmons depicts a tumultuous time in the history of both Native and white Americans. Haunted by Custer's ghost, and also by his ability to see into the memories and futures of legendary men like Sioux war-chief Crazy Horse, Paha Sapa's long life is driven by a dramatic vision he experienced as a boy in his people's sacred . In August of 1936, a dynamite worker on the massive Mount Rushmore project, Paha Sapa plans to silence his ghost forever and reclaim his people's legacy-on the very day FDR comes to Mount Rushmore to dedicate the face.

Now for the giveaway!

You will have until March 20th to enter and I will draw for winners on March 21st.
Posted by Jo-Jo at 2:00 PM

Jo Jo...this is an awesome giveaway; thanks

I would love to win this book! I've been reading good things about it..

I am a follower

Please count me in; thanks!

Would love to listen to this.

This sounds great—please enter me to win!

I would love to be entered. :)

Stacy at The Novel Life said...

i would love to win this book! my email is anovelsource@yahoo.com

I am a folllower and I would love to win the Book Thief.

Please enter me!
stacybooks at yahoo

Great giveaway! I've heard great things about this one.

I am a follower and I would love to win Black Hills.
Love audiobooks for car trips.

Hey, I missed this!

Please count me in.

I would love to listen to this book. Please enter me in this giveaway.

I blogged about the giveaway:
http://meditativereading.blogspot.com/2010/03/jo-jo-loves-to-read-audiobook-giveaway.html

Would love to have this audio book on Black Hills by Dan Simmons. Sounds great