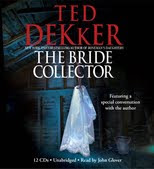 Thanks again to Anna from Hachette I am able to give away up to three copies of this unabridged audiobook on Jo-Jo Loves to Read!!!

Here is a summary of The Bride Collector by Ted Dekker from the Hachette website:

FBI Special agent Brad Raines is facing his toughest case yet. A Denver serial killer has killed four beautiful young women, leaving a bridal veil at each crime scene, and he's picking up his pace. Unable to crack the case, Raines appeals for help from a most unusual source: residents of the Center for Wellbeing and Intelligence, a private psychiatric institution for mentally ill individuals whose are extraordinarily gifted.

It's there that he meets Paradise, a young woman who witnessed her father murder her family and barely escaped his hand. Diagnosed with schizophrenia, Paradise may also have an extrasensory gift: the ability to experience the final moments of a person's life when she touches the dead body.

In a desperate attempt to find the killer, Raines enlists Paradise's help. In an effort to win her trust, he befriends this strange young woman and begins to see in her qualities that most 'sane people' sorely lack. Gradually, he starts to question whether sanity resides outside the hospital walls...or inside.

The FBI believes that the killer plans to murder seven women. Can Paradise help before it's too late?

Now on with the giveaway!

I will be giving away one book for every 10 entries with a maximum of three books to give away.

To enter this contest you must be at least 18 and live in the U.S. or Canada. No PO Boxes please.

You will have until June 5th to enter and I will draw for winners on June 6th.

Please throw my name in the hat! Thanks! milou2ster(at)gmail.com

Thanks for the contest! I've read good review things about The Bride Collector.

I've been trying unsuccessfully to win this audio book:( Thanks for another chance

I love audiobooks when I am driving, walking and knitting. This one sounds really good. Please enter me and thanks for the giveaway.

Thanks for the opportunity Jo-jo!

Award is waiting for you at my blog!

Please enter me for this one! Thanks for the giveaway.

I'd love to win this audiobook.
Love & Hugs,
Pam
pk4290(at)comcast(dot)net

I've always wanted to read one of his books - listening is just as good!
wolferock AT earthlink.net

thanks for the giveaway!! :)
mstbtflgrlnthwrld@gmail.com

I would love to win this audiobook. Please enter me! Thank you for the giveaway!

would enjoy listening to this novel...thanks for the chance :)

I would love to be entered. Thanks!
pbclark(at)netins(dot)net

I have been wanting to read The Bride Collector since the first review and have on my wish list. If I win this audiobook I can listen as I garden or even working around my home.
Thanks for the opportunity to enter and pls count me in.

Please count me in. Thank you!

Thank you for adding my name to your giveaway contest!

would be great to win the audio version of this book!

Thanks
gopaulson - is at - gmail dotcom

I found your review to be intriguing and one that I think I would take pleasure in reading.
Thank you so much for hosting this giveaway.

I would love to enter!

Hi! I love Ted Dekker. Thanks for the chance to win! christina.l.sutton@gmail.com

Would love to enter.

Please enter me in this giveaway - Thanks!

Please enter me to win this audiobook.

Thanks for the contest!