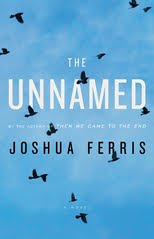 Tim Farnsworth is a handsome, healthy man, aging with the grace of a matinee idol. His wife Jane still loves him, and for all its quiet trials, their marriage is still stronger than most. Despite long hours at the office, he remains passionate about his work, and his partnership at a prestigious law firm means that the work he does is important. And, even as his daughter Becka retreats behind her guitar, her dreadlocks and her puppy fat, he offers her every one of a father's honest lies about her being the most beautiful girl in the world.

He loves his wife, his family, his work, his home. He loves his kitchen. And then one day he stands up and walks out. And keeps walking.

THE UNNAMED is a dazzling novel about a marriage and a family and the unseen forces of nature and desire that seem to threaten them both. It is the heartbreaking story of a life taken for granted and what happens when that life is abruptly and irrevocably taken away.

My Review:
I think that this is the first audiobook that I have listened to that was read by the author, and I believe that it gave me a higher level of enjoyment because of that.  This story is about what can happen to a family when they are plagued by a disease that cannot be medically proven by anyone, from psychiatrists to medical specialists.

Tim lives with his wife and daughter in a beautiful suburb of Manhattan.  He has a wonderful marriage with his beautiful wife Jane and a very satisfying career as a lawyer for a firm in the city.  From the outside one would think that Tim has everything he needs, but little does anyone know how the unnamed disease hinders his ability to live a normal life.

Tim finds himself living a normal life sometimes for weeks or months at a time until the disease surfaces and takes control of his body both mentally and physically.  Eventually this takes a toll on his marriage and family life and Jane finds herself turning to other coping mechanisms to help her deal with the situation.  Before you know it the disease has not only taken over Tim's life but has also wreaked havoc over Jane's emotional stability also.

We follow Tim through his encounters of the illness and watch as the disease seems to develop its own personality within Tim's mind.  Tim struggles to get back to his life with Jane, but when he is finally able to break through will it be too late?  How can a family live a normal life while one of you has a disease that could attack your well-being at any moment.  The Farnsworth's try to live in a way that keeps the disease a secret, but as you know secrets have a way of becoming revealed.  I really enjoyed listening to this story, hearing Tim's raw emotions when the disease was full force, but just as important was Jane's story of survival.

Disclosure:  This audiobook is part of my personal collection and I listened to it for my own entertainment.
Posted by Jo-Jo at 11:00 AM

I listened to this book too! It was great because I felt like we got the author's take on what parts should be emphasized. I'll add your review to the Reagan Arthur Books Challenge.

Wow - that's awesome Ferris read his own audiobook. Very rare, indeed. I think you and I are two of the few people who liked this story - but I liked it a lot. Ferris is awesome!

I read this one, but after your review and Kathy's, I'm wishing I had listened to it!

I can't wait to get my hands on this audio. I heard great things and liked your review a lot as well; thanks Jo Jo

I think that it makes a huge difference when an audio book is read by the author.

I usually find that if a book is read by the author, it appeals to me more. Maybe because they know exactly what emotions to invest in the reading.

This is the first review I've read of this one. I really enjoyed his Then We Came To The End. Sounds like this one won't be as tongue in cheek as this one. I'll have to look into it.