It has definitely been awhile since I posted a Friday Find! I first noticed Burnt Shadows by Kamilie Shamsie over at Literary Menagerie well over a month ago. I just haven't had time to post about it, but as I was scanning Library Thing the other day it popped up again. This is one that I definitely want to read! 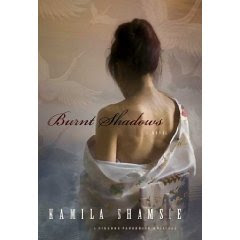 Here is a summary of Burnt Offerings from the RandomHouse.ca website:

Sweeping in scope and mesmerizing in its evocation of time and place, Burnt Shadows is an epic narrative of disasters elided and confronted, loyalties offered and repaid, and loves rewarded and betrayed.

August 9, 1945, Nagasaki. Hiroko Tanaka steps out onto her veranda, taking in the view of the terraced slopes leading up to the sky. Wrapped in a kimono with three black cranes swooping across the back, she is twenty-one, in love with the man she is to marry, Konrad Weiss.

In a split second, the world turns white. In the next, it explodes with the sound of fire and the horror of realization. In the numbing aftermath of a bomb that obliterates everything she has known, all that remains are the bird-shaped burns on her back, an indelible reminder of the world she has lost.

In search of new beginnings, Hiroko travels to Delhi two years later. There she walks into the lives of Konrad’s half-sister, Elizabeth, her husband, James Burton, and their employee, Sajjad Ashraf, from whom she starts to learn Urdu. As the years unravel, new homes replace those left behind and old wars are seamlessly usurped by new conflicts. But the shadows of history - personal, political - are cast over the entwined worlds of the Burtons, Ashrafs, and Tanakas as they are transported from Pakistan to New York, and in the novel’s astonishing climax, to Afghanistan in the immediate wake of 9/11. The ties that have bound them together over decades and generations are tested to the extreme, with unforeseeable consequences.

Another book that caught my eye quite awhile ago was A Reliable Wife by Robert Goolrick. I first noticed this one over at Booking Mama-you should really check out her review. Books that take place in rural Wisconsin always attract me, since rural Wisconsin is part of my everyday life.

Here is what Algonquin Books has to say about A Reliable Wife:
With echoes of Wuthering Heights and Rebecca, Robert Goolrick's intoxicating debut novel delivers a classic tale of suspenseful seduction, set in a world that seems to have gone temporarily off its axis.

And last, but definitely not least, I have found The Traitor's Wife by Susan Higginbotham. I've been noticing this book on quite a few blogs now, but I think it was first brought to my attention by Passages to the Past and A Reader's Respite. 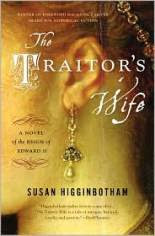 Here is a summary of The Traitor's Wife from Susan Higginbotham's website:
In fourteenth-century England, young Eleanor de Clare, favorite niece of King Edward II, is delighted with her marriage to Hugh le Despenser and her appointment to Queen Isabella’s household as a lady-in-waiting. It soon becomes apparent, however, that Eleanor’s beloved uncle is not the king the nobles of the land—or his queen—expected.

Hugh’s unbridled ambition and his intimate relationship with Edward arouse widespread resentment, even as Eleanor remains fiercely loyal to her husband and to her king. But loyalty has its price …

Moving from royal palaces to prison cells, from the battlefield to the bedchamber, between hope and despair, treachery and fidelity, hatred and abiding love, The Traitor’s Wife is a tale of an extraordinary woman living in extraordinary times.

So, has anything new caught your eye recently?

It looks like you have some good finds! I am interested in The Reliable Wife. Thanks for the links to the other blogs that already have reviews on these. Happy Friday and Happy Reading!

Burnt Offerings looks amazing and I love the cover. Another book to add to my growing wish list pile.

THE RELIABLE WIFE is definitely one of the best books that I've read this year! Thanks for the shout-out!

Please check my blog, I have given you an award! :)

All of these sound interesting to me! I agree with Popin, the cover to Burnt Offerings is great!

That Burnt Shadows books sounds really good. A bit on the sad side perhaps but good.

I think that The Traitor's Wife looks great. I am definitely going to put it in my TBR pile.

Burnt Offerings sounds gripping! That one and The Reliable Wife have caught my eye. Thanks for sharing!
*smiles*
Kim

Burnt Shadows sounds like a must-read for me. I hope you get a chance to read The Traitor's Wife. I loved it!

I really want to read 'Reliable Wife', I've read so many good things about this one.

Hi, Jo-Jo! Just checking in to see how you're doing!