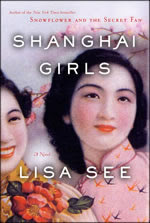 Have I mentioned lately how much I love Lisa See novels? If you are new to my blog you now have the knowledge that she is one of my favorite authors. Lisa See blew me away with Snow Flower and the Secret Fan, and followed behind that with Peony in Love, which gave us a whole new perspective of Chinese culture and beliefs. I wasn't blogging yet when I read Snow Flower and the Secret Fan, but you can see my review of Peony in Love here.


Here is a summary of Shanghai Girls by Lisa See from her website:

In 1937, Shanghai is the Paris of Asia, full of great wealth and glamour, home to millionaires and beggars, gangsters and gamblers, patriots and revolutionaries, artists and warlords. Twenty-one-year-old Pearl Chin and her younger sister May are having the time of their lives, thanks to the financial security and material comforts provided by their father’s prosperous rickshaw business. Though both wave off authority and traditions, they couldn’t be more different. Pearl is a Dragon sign, strong and stubborn, while May is a true Sheep, adorable and placid. Both are beautiful, modern, and living the carefree life ... until the day their father tells them that he has gambled away their wealth, and that in order to repay his debts he must sell the girls as wives to suitors who have traveled from Los Angeles to find Chinese brides.

At its heart, Shanghai Girls is a story of sisters: Pearl and May are inseparable best friends, who share hopes, dreams, and a deep connection. But like sisters everywhere, they also harbor petty jealousies and rivalries. They love each other but they also know exactly where to drive the knife to hurt the other sister the most. Along the way there are terrible sacrifices, impossible choices and one devastating, life-changing secret, but through it all the two heroines of this astounding new novel by Lisa See hold fast to who they are – Shanghai girls.

Shanghai Girls is an amazing novel that shows the true power of sisterly love. Pearl and May are two sisters that live in Shanghai and are known as Beautiful Girls. Beautiful Girls were known to pose for calendars and various advertisements, and because of their status their company was sought out for entertainment purposes. It was not uncommon for these sisters to return home during the early hours of the morning after an exciting night frequenting night clubs and high-end parties. Since their father provided all of the girl's necessities, they were able to spend their earnings on more of the glamorous and westernized fashions and comforts.

Pearl and May's carefree lifestyle comes to an abrupt end when they learn of their father's promise to sell them as brides to settle his large gambling debts. This, along with the Japanese invading the country, sets a new string of events in action. When the girls defy their new father-in-law by not meeting them at the ship that is to take them to the United States, it just makes their current situation worse. They find themselves stranded in a country that is war-tattered and wishing they would have left the country when they had the opportunity. Now they must reach into the depths of their souls for the strength to continue a journey that will take them far from their beloved China.

After a grueling journey across the ocean they arrive in Los Angeles only to undergo months of interrogation before being allowed to reunite with their arranged husbands. Although they didn't love their husbands when they met them, the girls knew that they were their only opportunity to be able to remain in the United States. They accepted their fate and embraced their futures by becoming active members of the Louie family. It was a hard life, especially with their father-in-law always ordering them as to what they would do, where they would work, and taking most of the money they earned, but they did what was necessary to preserve their futures.

The interrogations were an interesting part of this novel. The time period runs from 1930 to 1957 and the sisters were interrogated in the beginning when arriving at Los Angeles, and then again toward the end of the novel, for being suspected of communism. It really was sad to see how these people were mistreated during these times.

I loved how this novel gave us a mixture of both ancient Chinese culture and a more modern view. May and Pearl's mother had bound feet but the sisters were obviously born after footbinding was no longer required. There were also some visible differences between the cultural death rituals, which would be more obvious if you had read Peony in Love. Here is an excerpt from page 182 that describes the desire for traditions:

She's grabbed on to old traditions-outdated traditions-in the same way I latch on to them now: as a means of soul survival, as a way to hang on to ghost memories. Perhaps it's better to treat a cough with winter melon tea than by putting a mustard plaster on your chest. Yes, her way-back stories and her old ways are sinking into me, changing me, instilling more "Chinese" into me, as surely as the flavor of ginger seeps into soup.

To me this novel was about first love, new loves, sacrifices, secrets, and forgiveness, but most of all the undying sisterly love that is so visibile between May and Pearl. Here is an excerpt from page 202 that was a good example of their lives together:

May and I are sisters. We'll always fight, but we'll always make up as well. That's what sisters do: we argue, we point out each other's frailties, mistakes, and bad judgement, we flash the insecurites we've had since childhood, and then we come back together. Until next time.

May and Pearl were on a continual journey of finding a home in China to creating a new home in the United States. As the book ends Lisa See creates a new journey that they must begin together. See provided so much historical information from this time period that I now have a better understanding of the different Chinese languages that were used, the Chinese army, and the interrogations that the Chinese people had to endure. I thorougly enjoyed this book and want to give a special thank you to Debbie from The Random House Publishing Group. This book will be available in store on May 26, 2009.

I can't wait to read this book!

Great review! I am looking forward to reading this one--hopefully sooner than later. I haven't yet read Peony in Love or the authors mystery thriller books, but I have read Snow Flower and the Secret Fan which I just loved.

Great review! I'm going to reserve it at my library. I LOVED Snow Flower and the Secret Fan, but I must admit that I wasn't as big a fan of Peony in Love.

I can tell how much you really love Lisa See by this wonderful and very thorough review.
I will be reading 'Snow Flower...' this week and then moving on to 'peony in Love' so I can finally get to read this book.

I am supposed to get this from LT but it hans't arrived yet. I skimmed your review to see if you liked it, and you did but I will come back to read the entire review once I've read the book!

I recently came across your blog and have been reading along. I thought I would leave my first comment. I dont know what to say except that I have enjoyed reading. Nice blog. I will keep visiting this blog very often.

Sounds lovely :)
Thanks for a great review.

I still have that first See book to read, but then hopefully one day this one

I have never read a Lisa See novel, but I can see now that I should change my ways.....lovely review!

I'm glad you loved it as much as I did. We're going to Chinatown today!

Great review. I'd love to get a copy of this one for my shelf one of these days.

Excellent review! Makes me want to read it that much more.

I have an ARC of this book and am looking forward to reading it soon so will read your review again after I finish this book! Have not read any of Lisa See's books yet so am curious to see how I'll like it.

I received a copy of this book, and I can't wait to start reading it. I haven't read any of Lisa See's books but I've heard such good things about them.

This is a story of two sisters, Pearl and May, who start out life in Shanghai. They are young and beautiful in 1937. They are models. They make money. They expect to marry for love one day. They have it all. Or so they think. However, unknown to them their father has gambled away the family money and to survive he has to sell his daughters to young American Chinese brothers who have come looking for brides. Actually, it's more like their father lost them to the young brother's father. Gambling, it's always been a disease.

The girls go through with the marriage ceremony, but they don't get on the boat. They believe their lives will go on as usual, but the Japanese invade and to escape a fate worse than marriage to the unknown Americans, the girls escape China, go to America and begin their lives as wives.

Their journey to Los Angeles, through San Francisco, is not an easy one and neither is their lives with their husbands. The life of an immigrant then was not an easy one and it'll put a strain on the relationship the sister's have, almost destroying it. Their life is nothing like they expected it to be. This book is not what I expected either. It's very good, a great story and sort of a history lesson as well. I couldn't put it down.