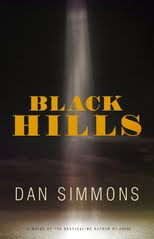 With the release of Black Hills this month, Valerie from Hachette is offering to give away three copies of this book to my readers!

I will be reviewing this book in a  couple of months but here is a summary of it from the Hachette website:

When Paha Sapa, a young Sioux warrior, "counts coup" on General George Armstrong Custer as Custer lies dying on the battlefield at the Little Bighorn, the legendary general's ghost enters him - and his voice will speak to him for the rest of his event-filled life.

Seamlessly weaving together the stories of Paha Sapa, Custer, and the American West, Dan Simmons depicts a tumultuous time in the history of both Native and white Americans. Haunted by Custer's ghost, and also by his ability to see into the memories and futures of legendary men like Sioux war-chief Crazy Horse, Paha Sapa's long life is driven by a dramatic vision he experienced as a boy in his people's sacred . In August of 1936, a dynamite worker on the massive Mount Rushmore project, Paha Sapa plans to silence his ghost forever and reclaim his people's legacy-on the very day FDR comes to Mount Rushmore to dedicate the face.

Now for the giveaway!

To enter this contest you must be at least 18 and live in the U.S. or Canada.

You will have until February 28th to enter and I will draw for winners on March 1st.
Posted by Jo-Jo at 6:56 PM

Please enter me for this one. It sounds so interesting. I've always been fascinated by stories of Native Americans.

I have two Simmons books on my shelf that I haven't read, but I really need to! Maybe winning Black Hills will be the motivation I need to knock 'em all out in order. :)

Thanks for the contest. I live in the US. My email is gregoryRzimmerman@hotmail.com

My email address is laarlt78(at)hotmail(dot)com. Thanks for the great giveaway!

This sounds great. Please enter me.

I also posted this giveaway on my blog here:
http://giveawayroundup.blogspot.com/2010/02/giveaways_09.html

Please enter me in this giveaway. This book sounds great.

Woohoo!! please enter me. would absolutely love to read this!!

I would loveeeee to win this!

Thank you for entering my name in your giveaway!

This book sounds very good and I would like to read it.

I like reading stories that have some history to them. This book sounds so good.
Please enter me in the giveaway.
JOYE
JWIsley(at)aol(dot)com

Sounds like a good book. I'd love to read this. I'm fascinated by native american culture.

Please count me in. Thanks for the chance.

please enter me into the contest, I follow you on Google

I really want this one!! Thanks for the giveaway.

This book sounds really good! I know I would enjoy it! Thank you for the giveaway!
mittens0831 at aol dot com

I would love to win this too,
thanks! I was born in the Black Hills of SD!
marieburton2004 at yahoo dot com

This looks like an interesting book! Thanks for the chance!

Please enter me!
stacybooks at yahoo

Awesome! I've wanted this one. Please count me in. Thank you!

I would love to read this. Drood is a great novel, I'm sure this one is, too.
seknobloch(at)gmail(dot)com

I would love to be entered in your draw. Thanks.
wandanamgreb(at)gmail(dot)com

This book sounds very good and I would like to read it. Enter me please.

I would be very interested in reading this. I'm sure my husband, who is fascinated with Native American culture would also enjoy reading it!

I would love to read this book. Please count me in.

I'm a huge fan of Dan Simmons so please count me in for his new book. Thanks.

I'm interested in this one, with the exception of Drood, I love Dan Simmons, and I lived for 30 years on an indian reservation in northwest Montana. (I'm really hoping this book is like The Terror...an absolutely terrific book and nothing like Drood..which I thought blew..)

This book looks interesting. Thanks for the opportunity to win it!

I would love a chance to win this.
I love reading books on Native Americans especially since I am one.