Review: The Private Papers of Eastern Jewel by Maureen Lindley 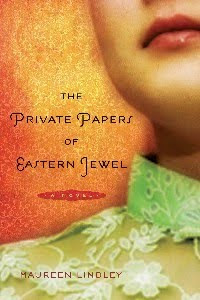 Here is a summary of The Private Papers of Eastern Jewel from the Bloomsbury USA website:

An electrifying epic, based on the incredible true story of a Chinese princess turned spy.

Peking, 1914. When the eight-year-old princess Eastern Jewel is caught spying on her father's liaison with a servant girl, she is banished from the palace, sent to live with a powerful family in Japan. Renamed Yoshiko Kawashima, she quickly falls in love with her adoptive country, where she earns a scandalous reputation, taking fencing lessons, smoking opium, and entertaining numerous lovers. Sent to Mongolia to become an obedient wife, Yoshiko mounts a daring escape and eventually finds her way back to Peking high society—this time with orders from the Japanese secret service.

Based on the true story of a rebellious woman who earned a controversial place in history, The Private Papers of Eastern Jewel is a vibrant reimagining of a thrilling life—a rich historical epic of palace intrigue, sexual manipulation, and international espionage.

My Review:
Before reading this book I must admit that I really had no knowledge of Eastern Jewel and what her significance was to both Chinese and Japanese history.  Although it is a fictional novel, it was based on facts and contained an ample amount of historical information.   I always enjoy historical fiction and for some reason I find myself drawn to fiction with an Asian element even more.

The book opens in 1914 with Eastern Jewel as a Chinese princess living a life of luxury in her father's palace with her mother and his many concubines.  She has never been the obedient chinese girl that all other girls from China seem to turn into.  One day her father has had enough of her insolence and decides to send her away to live with her uncle in Japan.  Although the lifestyle in Japan is not as pampered or grand as she has been accustomed to, she embraces her new country.  As she holds a resentment in her heart for China she finds a love for Japan that allows her to do anything to help her new country.

When Eastern Jewel first moves to Japan to live with the Kawashima family, she finally realizes that she will not have much of a life ahead of her.  They will fulfill their obligation by raising her until a certain age and then give her to the man of their choosing to be an obedient wife.  She knows that she could never live her life this way, but follows along with the plan until she sees a chance to flee from this life forever.  Upon her escape she is taken on a journey that opens up new opportunites and friends that help her gain a firmer grasp on the life that she wants to lead.

After her escape,  Eastern Jewel returns to Japan and learns that she can make a lucrative income as a high price call girl.  Since she has always been a sexually provocative girl she finds that this job provides the easiest money she could ever make.  It is through her connections as a call girl that she is introduced to the Japanese Secret Service and becomes a spy.

I found it very sad that with all the passion that Eastern Jewel had in her heart that she only found real love twice in her life, and both times were short-lived.  After her first experience of heartbreak she promised herself that she would never fall in love again.  But when she did fall in love the second time she fell hard.  She found herself having to choose between the love of a man and her love for Japan, and she chose Japan.

This was a very interesting and informative book and I appreciated the timeline of Eastern Jewel's life that was provided at the end of the book.   I also feel that I must warn you that there were quite a few sexually graphic scenes within the book.  If you find yourself enjoying Asian fiction then you also may find this book enjoyable.

Disclosure:  This book was provided to me by Bloomsbury USA through the Shelf Awareness newsletter.
Posted by Jo-Jo at 12:05 PM

I don't know anything about Eastern Jewel. I do love Asian fiction, but I have yet to hear of anyone who was just crazy about this book.

I tried to read this one,but was unsuccessful. I did enjoy your thoughts about this one.

I have an award for you http://trinsnook.blogspot.com/2010/02/and-award-goes-to.html

I really enjoyed this book-I had never heard of her story before this book.

Bummer! This seemed like it got a lot of hype but it can't seem to live up to it. I do love that cover though!

There has been mixed reviews of this one. I also have no idea about Eastern Jewel and I have come a/c no other book with this storyline. So for its historical aspect I might read this one.

I've been wanting to read this book, but I actually had no idea that it was partially based on a true story. I adore Asian fiction and historical fiction, and this book sounds absolutely wonderful!
Thanks for such a great review!

I am not familiar with Eastern Jewel but I love to read Asian Fiction. I have this one TBR so I'll give it a try.

I didn't know this was based on a true story. Sounds interesting, but I've seen a lot of so-so reviews, so I'm not sure whether I'll give it a try or not.