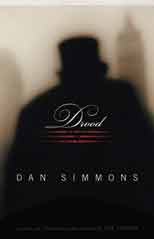 I am happy to announce that since Drood is being released in paperback this month Valerie from Hachette is offering to give away three copies of this book to my readers!

Here is a summary of Drood from the Hachette website:

On June 9, 1865, while traveling by train to London with his secret mistress, 53-year-old Charles Dickens--at the height of his powers and popularity, the most famous and successful novelist in the world and perhaps in the history of the world--hurtled into a disaster that changed his life forever.

Did Dickens begin living a dark double life after the accident? Were his nightly forays into the worst slums of and his deepening obsession with corpses, crypts, murder, opium dens, the use of lime pits to dissolve bodies, and a hidden subterranean mere research . . . or something more terrifying?

Just as he did in The Terror, Dan Simmons draws impeccably from history to create a gloriously engaging and terrifying narrative. Based on the historical details of Charles Dickens's life and narrated by Wilkie Collins (Dickens's friend, frequent collaborator, and Salieri-style secret rival), DROOD explores the still-unsolved mysteries of the famous author's last years and may provide the key to Dickens's final, unfinished work: The Mystery of Edwin Drood. Chilling, haunting, and utterly original, DROOD is Dan Simmons at his powerful best.

Here is how to enter:

You will have until February 15th to enter and I will draw for winners on February 16th.
Posted by Jo-Jo at 4:25 PM

I would love to win this book!
amandarwest at gmaildotcom

I would love to win this book! I adored Hyperion, and I've been wanting to read something else by Dan Simmons!
+2 I put it in my sidebar under the COntest list - http://brizmusblogsbooks.blogspot.com

I didn't realize the paperback version was coming out until I saw your post! Please enter me.

PLEASE pick my, I've been trying to win this book forever...LOL

Please count me in.

Please throw my name in the hat for this one.

I would love to win this book

Never read any of his work!
wolferock AT earthlink.net

And you have an award at my blog!

I would LOVE to win :)
stacybooks@yahoo.com

I would love to be entered. Thanks!

I'd love to get this book! Please count me in. Thank you!

Thank you for entering my name in your giveaway!

This sounds like a great read for a cold winter evening. My email is in my profile.

This looks great. Thanks for the fabulous giveaway.

sign me up please! I've added this to my giveaway sidebar =)
http://angeltyuan.blogspot.com
thanks!

Please count me in. Thanks for the chance.

I would love to win this,
thanks!
marieburton2004 at yahoo dot com

This looks like an interesting book! Thanks for the chance!