Review: My Antonia by Willa Cather 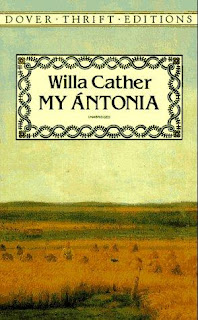 Here is a summary of My Antonia from the Reading Group Guides website:

Perhaps the most popular of Cather's novels, My Ántonia is at once the intimate portrait of an American heroine, an elegy for a vanished frontier, and the story of an unconsummated love affair. Jim Burden, the narrator, meets Ántonia Shimerda as a child on the Nebraska prairie. He is an orphan and a Protestant, she the daughter of ill-adapted Bohemian immigrants; her father will kill himself when he is broken by the harshness and solitude of their new home. Jim and Ántonia grow up together, and he harbors vague and contradictory romantic yearnings toward her. But they are separated in their youth and spend most of their lives apart. While Jim pursues his education and becomes a lawyer for the railroad, Ántonia goes into domestic service, survives a near-rape, is seduced and abandoned by a heartless lover, and bears a baby out of wedlock. Much of her story unfolds secondhand, as Jim gathers it from other sources. They are reunited only briefly at the novel's end, and by then both of them are married, Jim unhappily so.

What is it that makes Ántonia a genuinely heroic figure? Partly, it is her ability to emerge undiminished and unembittered from circumstances no less bleak than the ones that killed her father, to improvise happiness in the same way she once improvised stories. In the course of the novel, Ántonia also becomes an embodiment of the narrator's memory, which has the power to withstand time and redeem its losses. Of course, it is not only Jim's memory that is in play: Ántonia represents all the strength, resilience, and unselfconscious nobility of a decisive moment in our nation's past. The virtues that Cather associates with her heroine have either become obsolete or have receded into our collective unconscious, but the sight of her is enough to reawaken our memory of them: "She lent herself to immemorial human attitudes which we recognize by instinct as universal and true....she still had that something which fires the imagination, could still stop one's breath for a moment by a look or gesture that somehow revealed the meaning in common things." [p. 258]

My Review:
What a beautiful classic novel this was, laced with Bohemian traditions and vivid descriptions of the landscape.  I will admit that at first this book was a bit difficult for me to read, but once I decided to lock myself away without any distractions I became immersed in the pages.  Although the story is about Antonia, I think it is more about how Antonia impacted Jim Burden's life.

Jim lived with his grandparents on a farm in Nebraska and his life seemed to change when Antonia moved to a neighboring residence with her Bohemian immigrant family.  He becomes very close with Antonia and her brother and can only imagine that they will be friends for many years to come.  Antonia's mother is portrayed as a very greedy woman and vocally shares her inhibitions with her neighbors.  When times get tough for the family the greed and selfishness seems to spread to her children and this creates a feud of some sort between Jim and Antonia that will last for a couple of years.

When Jim's grandparents become too old to manage the farm they move to the city to live.  Jim starts to attend school in the city and is introduced to a new set of friends.  He sees that an element is missing from these friendships compared to the relationship that he had with Antonia.  So you can only imagine his happiness when he learns that Antonia is going to also be moving to the city to work as a servant for a home nearby.  Their friendship picks up again as if there were never an argument of any kind in the first place.

Lena is another important character in this novel.  She becomes a good friend of Antonia's and you can see that she definitely has a much wilder streak about her.  Jim worries that Lena will take Antonia down the wrong path and just be a very bad influence on her.  I found it very interesting how Cather portrayed both Lena and Antonia when they were young girls, and then as adults.

The story was heartbreaking in the sense that you could feel the love that both Jim and Antonia felt for each other, but they never acted upon their feelings. When the book ends Jim seems to come to terms with the direction that his life has taken and how Antonia had affected it.  When he catches a glimpse of the life and love in Antonia's eyes at the end of the novel that is all he needs to know that they both had taken the right paths.

This book was so much more to me than a classic novel with beautiful descriptive writing.  Many of you know that my Grandma recently moved in with me and she is also Bohemian.  So as I was reading this book it juggled memories of her life and stories for me.  I could see so many comparisons with the Bohemian traditions that it truly amazed me.  I found it interesting how Antonia had such a close relationship with her father, as my Grandma's father/daughter relationship was similar.  My Grandma will still tell you to this day about the hollyhocks that she grew by her house in the summer.  This was a beautiful story and it also created a great book club discussion for my group.

Disclosure:  I borrowed this book to read for my own entertainment.
Posted by Jo-Jo at 8:09 AM

Jo-Jo busy does not even describe January-and the fun continues into February. You have no idea how much sleep I need-I close my eyes and next thing I know it is time to wake up.

I cannot wait to see what book he also chooses.

This book has been a favorite of mine since I had to read it for a high school English class. I have read many times over the ensuing years and I am about due for a re-read. I love that always seem to get something new and different out of this book everytime I read it! But one thing that never changes is the beautiful writing style you mentioned in your review!

It's so nice that you have the opportunity to spend quality time with your grandmother :o)

Great review, and the book really does sound very lovely

This book has been a favorite of mine since a college lit class in which we covered Cather. thanks for brining back those reading memories!

This does sound like the type of book that takes a little while to adjust to. Glad you enjoyed it so much!

To think that I never heasrd of this one, makes me feel sad! Sounds like something i will like!

I've never read this classic, but it sounds like it has held up well!

Great review. I can't wait to read this.

I'm always excited when someone discovers My Antonia. It's a long-time favorite of mine.