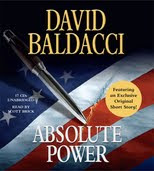 Here is a summary of Absolute Power from the Hachette website:

Available for the first time Unabridged on CD in an all-new recording by Scott Brick, the first of the blockbuster thrillers by New York Times bestselling author David Baldacci. The book that will change the way you think about Washington - and power - forever.

In a heavily guarded mansion in a posh Virginia suburb, a man and a woman start to make love, trapping a burglar behind a secret wall. Then the passion turns deadly, and the witness is running into the night. Because what he has just seen is a brutal slaying involving the president of the United States.

Luther Whitney is the career break-in artist who's in the wrong place at the wrong time. Alan Richmond is the charming U.S. president with the power to commit any crime. And Jack Graham is the young attorney caught in a vortex between absolute truth and... ABSOLUTE POWER

My Review:
I had no idea what to expect when listening to this book, but before I knew it I was caught up in the political suspense that was bound to entrap Jack Graham.  I have a few friends that have read many Baldacci books and rave about them, so I decided to try the audioversion of this author.  Maybe some of you that listen to audiobooks have found what I did-that I enjoy listening to genres that I don't usually enjoy reading.  Suspense thrillers would be one of those genres that I don't enjoy reading but always find myself drawn to in the audio form.

A crime takes place in the beginning of this novel that involves the President, the Secret Service, and the Chief of Staff.  As the story unfolds these people will do anything and stop anyone that would jeapordize the presidency.  Since Luther Whitney somehow is the only witness to the unfortunate event he finds himself not sure who to confide in.  His daughter Kate is an attorney for the Commonwealth, but since their relationship has been strained for so long he wouldn't know where to begin explaining what happened.  Kate was engaged to a nice young man named Jack Graham who was also a lawyer.  Luther found a respect for Jack that gave him the courage to leave a trail for Jack to learn about the President's actions.

Before Luther and Kate are dropped back into Jack's life, everything seems to be going perfect for him.  He is engaged to Jennifer, who happens to be the daughter of one of the most powerful and wealthiest families in Washington.  When Jack sees his future father-in-law rubbing elbows with the President of the United States he somehow knows deep down that he will never fit into the same social circle that Jennifer is a part of.  When Jack starts to help Luther Whitney with his dilemma he finds himself drawn to the simple, but yet happy life that he led when he was with Kate.

We learn a lot about the many characters within this story.  The Secret Service men involved in the crime both seem to be good men, but victims of political circumstances.  Burton is the family man that has been married for over twenty years and has two kids at home.  When he finds himself having to take control of the situation he doesn't know how he can ever face his family again.  Collins is an agent who has put his life on the line before and will not hesitate to do it again.  He somehow loses sight of his goals as he becomes entwined in a passionate affair.

There were so many unpredictable twists and turns in this audiobook that I really was unsure of how it could possibly end.  If you are interested in listening to an action packed political thriller then this book would be a great choice for you!  I've also just started paying attention to who is narrating audiobooks, and I have heard many bloggers mention Scott Brick as being a fabulous reader.  Well you can add my name to that list of bloggers because while I was listening to this book I found his voice very engaging and WOW, does he build suspense!  Please keep in mind that this rating is for the audioversion.

Disclosure:  This audiobook was from my personal library and I listened to it for my own entertainment.
Posted by Jo-Jo at 7:11 AM

I love David Baldacci's work, so I imagine I'll love this one too. Great review!

This was the first Baldacci book I read and it made me a fan, big time. I have been a little disappointed in some of his books in the past few years but these early books are rock solid good. I'd like to go back and listen to this one. I'll bet it's even better in audio.

This was my first Baldacci book and I also listened to it....this book made me FALL IN LOVE with this author and now I can't STOP listening to him. I also like listening to this genre!! Great review - I give it 5/5 also1

Good to see you liked it, I think I could try Baldacci one day actually