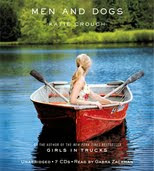 Here is a summary of Men and Dogs by Katie Crouch from the Hachette website:

In April of 1985, Buzz Legare went fishing. The next day all that was found was his boat and his waiting, faithful dog.

Twenty years later, his daughter Hannah still finds hope in believing, alone among her family, that he's still alive somewhere. She has a smart husband, a thriving business, a beautiful home in San Francisco-and a huge hole in her troubled heart. True to her trademark talent for self-sabotage, she finds herself one starry night climbing up the fire escape in a desperate (and drunken) attempt to win back her own husband--and failing disastrously.

Slightly worse for the wear, Hannah returns to Charleston to salve her wounds. There, old loves, unrepented crimes, and family legends are stirred up from the dust. Hannah's brother Palmer, the stoic with a secret of his own, cannot dissuade her from a manic search to uncover clues to the past, and they will both face shocking discoveries that lead them to reconcile their very different notions of loyalty and blind faith.

As she did so memorably in her bestselling debut, Girls in Trucks, Katie Crouch has created another great voice--spiky, tender, and hilarious--in the screwball heroine Hannah Legare. Much like Julia Roberts in My Best Friend's Wedding, Hannah follows the misguided impulses of a heart that's in the right place.

My Review:
Men and Dogs was a pretty serious audiobook that brought us into the life of Hannah Legare when she basically hits rock bottom.  Hannah was married and had a very successful on-line business but somehow managed to lose it all by never fully accepting her father's absence in her life.

After a life-threatening accident Hannah finds herself back home in Charleston being nursed back to health by her family that she hasn't seen in years.  Upon arriving at her childhood home she starts to wonder once again about the disappearance of her father.  She has always believed that her father is still alive somewhere and throughout the novel new things come to light about her parents that help to give her a different and clearer perspective on her own life.

Hannah's brother Palmer was a very interesting character in this novel.  He was a local veterinarian that also happened to be gay.  Since his father's disappearance a piece of Palmer seems to be missing also, as he can't seem to maintain a long-term romantic relationship.  Where Hannah seems to lose control of her life in general, Palmer seems to be afraid of the implications of love.

I loved the journey that this book took me on, giving me insight into the lives that both Hannah and Palmer led.  We see how the decisions that they made when they were younger shaped them into the adults that they have become.  By not accepting the truth about their lives, they found themselves living in a way that wasn't really living at all, but just getting by.

I enjoyed listening to this audiobook and thought that Gabra Zackman did a good job narrating.  I've read several mixed reviews of this book so although you should know this book isn't for everyone, something about this one just connected with me.  With themes of loss, grieving, and acceptance I think this would also make a great book club selection.  I can even admit that with the serious content of this book it even made me laugh once and awhile.  This was my first book by Katie Crouch and I'm looking forward to reading more of her books in the future.

Disclosure:  This book was provided to me from Anna at Hachette in exchange for an honest review.
Posted by Jo-Jo at 7:32 AM

What a great review! I have this audiobook as well and need to give it a listen. It sounds like it will be a great story. What a gorgeous blog you have!!

Great review!! I liked this book a lot too!

I'm currently listening to this on CD and am really enjoying it. Crouch really has a way with setting a scene and drawing compelling characters.

This book sounds just up my alley! This goes to my wishlist!