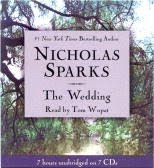 Here is a summary of The Wedding from the Hachette website:

With The Notebook, A Walk to Remember, and his other beloved novels, #1 New York Times bestselling author Nicholas Sparks has given voice to our deepest beliefs about the power of love. Now he brings us the long-awaited follow-up to The Notebook-a story of an ordinary man who goes to extraordinary lengths to win back the love of his life... After thirty years, Wilson Lewis is forced to face a painful truth: the romance has gone out of his marriage. His wife, Jane, has fallen out of love with him, and it is entirely his fault.

My Review:
The Notebook was the first book that I read by Nicholas Sparks and I recall tears streaming down my face as I read the entire story.  Dear John had a similar affect on me so I was a bit apprehensive when a friend of mine suggested that I listen to the audiobook of The Wedding. I wasn't sure what to expect from this story but my friend assured me that I would enjoy the book and that I would be happy with the outcome.

You may remember the heartbreaking love story between Noah and Allie from The Notebook.  The Wedding picks up after Allie has passed away and Noah has decided to continue living at the assisted living center as his health has been failing.  They managed to raise some wonderful, God-fearing children that have his best interests at heart.  We get a close look at the life that their daughter Jane lived after she married Wilson thirty years before.

Wilson and Jane met and fell in love during their college years.  Shortly after graduating from college they married and started a family together.  They did everything that they needed to in order to raise happy and well-rounded children, but somewhere along the way they started taking separate paths.  Even though they still lived under the same roof they found they weren't communicating or even wanting to do little things to please each other any longer.  When Wilson forgets their anniversary Jane is so heartbroken and distraught that he really cannot be surprised when her emotions and attitude seem to be at an all time low.

Wilson realizes that his marital relationship is declining so he decides to confide in his father-in-law Noah, in an attempt to mend what he feels he has broken.  He is enlightened when he learns that life for Noah and Allie wasn't always the perfect love story that their children talk about, but they actually had rough patches just like most ordinary couples do.  Knowing this information gave Wilson hope that he could win the love of his wife once again.

This was such an inspiring story to listen to as I think many couples seem to lose their way after so many years of marriage.  Whether you are letting the romance or friendship fade, or just taking each other for granted it really is a wake-up call to let you know that it is possible to stop heading down that road and start your relationship over.  Tom Wopat did a wonderful job of narrating this novel and I just loved listening to him.  Some of you may remember him from his role as Luke Duke from The Dukes of Hazzard!  He was my favorite Duke brother then and he still is after listening to this book.  I don't usually enjoy romances myself, but because this seemed like such a probable situation I found myself thoroughly enjoying this audiobook.

Disclosure:  I borrowed this book from the library and listened to it for my own entertainment.  But in all honesty, my friend Miranda would not stop hounding me until I did listen to it!  Thanks Miranda, because you were right...I loved it!
Posted by Jo-Jo at 11:29 AM

I've never even heard of this book. I wonder how I missed it. Glad to see you enjoyed it so much.

Same here, I never heard of this one! I will definitely look out for this one!

I missed this one too! Thanks for the spotlight!

PS I have an award for you http://metroreader.blogspot.com/2010/09/summer-blogger-award.html

Kathy, Veens, and DCMetro: I'm not a big Sparks fan, and definitely not a romance reader, but I loved the audioversion of this book.

A friend of mine read it and enjoyed too. I always need lots of tissues when I read Sparks.

Jenny: Oh the tissues...I remember when I was listening to Dear John-I would end up crying almost every morning before work and mess up my make-up!

I read this book a couple of years ago. I absolutely loved it!! I had read The Notebook and enjoyed it. Honestly, I only picked it up because I was at the hospital with my young daughter that was hospitalized, and it was one of the only books in the parent lounge, and I was desperate. ( At that point I normally only read mystery type books)
I spotted The Wedding at a thrift store for a quarter! I think I can say that it is one of my favourite novels by Nicholas Sparks. It is definitely the one that made me a fan!