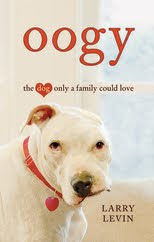 Thanks to Anna from Hachette I am able to give away up to two copies of this book on Jo-Jo Loves to Read!!!

Here is a summary of Oogy from the Hachette website:

In the bestselling tradition of Rescuing Sprite comes the story of a puppy brought back from the brink of death, and the family he adopted.

In 2002, Larry Levin and his twin sons, Dan and Noah, took their terminally ill cat to the Ardmore Animal Hospital outside Philadelphia to have the beloved pet put to sleep. What would begin as a terrible day suddenly got brighter as the ugliest dog they had ever seen--one who was missing an ear and had half his face covered in scar tissue--ran up to them and captured their hearts. The dog had been used as bait for fighting dogs when he was just a few months old. He had been thrown in a cage and left to die until the police rescued him and the staff at Ardmore Animal Hospital saved his life. The Levins, whose sons are themselves adopted, were unable to resist Oogy's charms, and decided to take him home.

Heartwarming and redemptive, OOGY is the story of the people who were determined to rescue this dog against all odds, and of the family who took him home, named him "Oogy" (an affectionate derivative of ugly), and made him one of their own.

Here is how to enter:
I will be giving away one book for every 10 entries with a maximum of two books to give away.

Winners will be subject to the one copy per household, which means if you win the same title on another blog you will receive only one copy of the title.

To enter this contest you must be at least 18 and live in the U.S. or Canada. No PO Boxes please.

You will have until Septebmer 18th to enter and I will draw for winners on or after September 19th.
Posted by Jo-Jo at 9:43 AM

I would love to win this book.
amandarwest at gmaildotcom

No need to enter me. I just love that cover! That poor baby.

I am a sucker for books about animals. Please enter me in this giveaway.
Love & Hugs,
Pam
pk4290(at)comcast(dot)net

I would LOVE to be entered in your draw. Thanks!
wandanamgreb(at)gmail(dot)com

What a heart-warming story! Please, count me in, I'd love to read this book.

I would love to read this books, it sounds really good.

This sounds like a real tender story. Please count me in.

I am looking forward to reading this book. My library has not ordered it yet, and I am on a "self- imposed book buying ban" until January!! I would love to win a copy! Please enter me. Thanks!

This sounds like a real heart-touching story ~ please enter me to win a copy.

This one is on my wish list, so I'd love a chance to win it!

Sounds adorable! Please count me in. Thank you!

This book sounds great. Thanks for the giveaway.
hmhenderson AT yahoo DOT com

I would love to read OOGY :) *Thanks* for the giveaway!
theluckyladybug[at]gmail[dot]com

Dogs are my favorite animal. I'd love to read this book.
JFWisherd(at)aol(dot)com

Please include me.
Thanks for the chance to win.

This seems like a great story. I would love to win the book

Read for your future! said...

This sounds good count me in
chaarmedone1512@aol.com