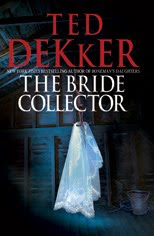 Here is a summary of The Bride Collector from the Hachette website:

FBI Special agent Brad Raines is facing his toughest case yet. A Denver serial killer has killed four beautiful young women, leaving a bridal veil at each crime scene, and he's picking up his pace. Unable to crack the case, Raines appeals for help from a most unusual source: residents of the Center for Wellness and Intelligence, a private psychiatric institution for mentally ill individuals whose are extraordinarily gifted.

It's there that he meets Paradise, a young woman who witnessed her father murder her family and barely escaped his hand. Diagnosed with schizophrenia, Paradise may also have an extrasensory gift: the ability to experience the final moments of a person's life when she touches the dead body.

In a desperate attempt to find the killer, Raines enlists Paradise's help. In an effort to win her trust, he befriends this strange young woman and begins to see in her qualities that most 'sane people' sorely lack. Gradually, he starts to question whether sanity resides outside the hospital walls...or inside.

The FBI believes that the killer plans to murder seven women. Can Paradise help before it's too late?

My Review:
This was an action packed audiobook that had my knuckles turning white as I was gripping the steering wheel every day.  John Glover did an excellent job narrating and I will even admit as I was driving alone in my car listening to this book, I had to peek over the backseat just to verify that I was alone!

Brad Raines has dealed with a lot of heartache throughout his life, but finds that he must confront his demons as his search gets underway for the Bride Collector.  Raines is somehow drawn to CWI (the Center for Wellness and Intelligence) early in the investigation and he is introduced to some unique individuals that will hold the key to breaking this case wide open.  At first glance they seem like a bunch of nuts, but as he befriends them he learns that they all have something to offer to the investigation.

Paradise is one of the residents of CWI and Brad finds himself drawn to her for more reasons than one.  As women are murdered at the hands of the Bride Collector, Brad becomes concerned that the murders are becoming more personal to him and finds himself worrying about the safety of Paradise.  Is he putting Paradise at risk by becoming attracted to her?

As the story unfolds Paradise becomes a key component of the Bride Collector's plans.  Brad must put his feelings aside and work with Paradise to try to find this killer before he strikes again.  The murderer hasn't killed a man yet, but who's to say that he wouldn't hesitate to kill Brad in the same way that he kills the women just so he could complete his quest.

This was a great audiobook that will keep you on the edge of your seat, and maybe even evoke a scream or two as you are driving down the road (yes, I am a big baby.)  I don't want to give any more of the book away, but if you enjoy books from the thriller/suspense genre then I definitely recommend this one to you.

Disclosure:  I received this audiobook from Anna at Hachette in exchange for an honest review.

I too found myself checking out the backseat while listening to this one and also jumped off my seat a couple of times! The sound effects and suspense in the book is amazing and the story was awesome as well! Great review!

I can't get into audiobooks but I have this one on my Wishlist, never read a TDekker book before.

Great review, I'm loving that you just had to check the back seat...

Yay! I'm glad to see this is so good. I'm heading to my parents tomorrow and plan to take my copy with me.

Im not sure that I want to be behind the wheel when I listen to this, but I do want to check it out!

I love Ted Dekker. I don't listen/read too many audiobooks, but maybe it's worth it? Or maybe I'll just grab the print version. :)