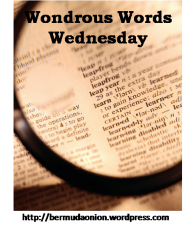 Here are some words that I learned while reading The Auscwitz Violin by Maria Angels Anglada:
Funambulist: a tightrope walker.

Here is how funambulist was used on page 18:
In those days, when persecution had grown more inexorable than ever, you had to walk a tightrope in order to live, but Jews were marked and were-like many others-poor funambulists.

Luthier: a maker of stringed instruments, as violins.

Here is how Luthier was used on page 18:
What could a luthier, a violin maker, do in hell?

Here is how quotidian was used on page 49:
Although everything in the camp had come to seem equally illogical, equally quotidian, still Daniel had been astonished when he was suddenly ordered to make a violin: as well crafted  "as if it were a Stradivarius," the Untersturmfuhrer had announced.

I think it's funny that my son played the violin for more than five years and I this is the first time I have heard the word luthier.  I'm staying home today because I'm not feeling so hot so I'm going to head to my couch for the afternoon and get started on The Heretic's Daughter by Kathleen Kent.  So did you learn any new words this last week?

Hihi, I must try to use Quotidian

Good meme ! I'm going to start participating too! I've never heard about this words too!

I did know quotidian, because the word is similar in French. Thanks for participating!

Great words, but if the sentence virtually uses a similar and simpler word to describe something it is redundant. Not all readers will want to struggle with difficult pronunciation. Lesson 101 on writing.
Nancy
N. R. Williams, fantasy author

I hope you feel better soon! I like "funambulist."