Review: The Passage by Justin Cronin 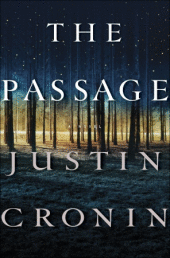 Here is a summary of The Passage from the Random House website:

“It happened fast. Thirty-two minutes for one world to die, another to be born.”

First, the unthinkable: a security breach at a secret U.S. government facility unleashes the monstrous product of a chilling military experiment. Then, the unspeakable: a night of chaos and carnage gives way to sunrise on a nation, and ultimately a world, forever altered. All that remains for the stunned survivors is the long fight ahead and a future ruled by fear—of darkness, of death, of a fate far worse.

As civilization swiftly crumbles into a primal landscape of predators and prey, two people flee in search of sanctuary. FBI agent Brad Wolgast is a good man haunted by what he’s done in the line of duty. Six-year-old orphan Amy Harper Bellafonte is a refugee from the doomed scientific project that has triggered apocalypse. He is determined to protect her from the horror set loose by her captors. But for Amy, escaping the bloody fallout is only the beginning of a much longer odyssey—spanning miles and decades—towards the time and place where she must finish what should never have begun.

With The Passage, award-winning author Justin Cronin has written both a relentlessly suspenseful adventure and an epic chronicle of human endurance in the face of unprecedented catastrophe and unimaginable danger. Its inventive storytelling, masterful prose, and depth of human insight mark it as a crucial and transcendent work of modern fiction.

My Review:
Wow, let me start by saying this was quite an amazing novel and I can't wait until the next installment is released!  I am not one who usually reads science fiction or apocolyptic books but Cronin did such a good job of including these elements among others to make for a very engaging read!

As this epic novel opens Amy is being dragged around by her mother who is just living day to day without any plan for her or Amy's future.  She seems to finally realize that her lifestyle is only hindering Amy so she finds an opportunity to leave her in the care of some nuns that come across her path.  Even though Amy is only with the sisters for a short period of time one nun seems to feel a special obligation to Amy.  As the book goes on and destruction of the life we all know seems imminent many people seem to be put in Amy's life to serve as her protector.

You may be wondering why Amy would need a protector.  Well it so happens that the government was running a secret operation to create a special weapon to be used in war, but the experiment goes awry.  Who wouldn't expect problems to arise when you are taking human beings and turning them into your own strain of a vampire?  Although there are only a limited amount of lab subjects, they seem to gain the upper hand and take control of the situation.  Before you know it the country and possibly the world is in total chaos as the vampires seem to become the dominant race.

As the military realizes what is happening to the population they start to save people, mostly children, by sending them to newly created colonies that will eventually be self-sustainable.  This opens a new part of the book to us as it is about 90 years after the initial attack.  I really enjoyed this part of the book because we are introduced to new characters that have only lived a life within the walls of their colony.  They didn't know what life was like before-when you could walk safely outside or even lay on the grass on a clear night and view the stars.  They learn to live by their own rules and laws, which seem to be going well except for the fact that the batteries are running low so the lights that protect them throughout the evenings will eventually go out.  Who could possibly solve this problem?

A few of the members of this colony decide that they must embark on a journey for the well-being of everyone still alive.  Along the life-threatening way, they come across another colony of survivors and can't help but wonder exactly how many more humans are alive out there.  A young man named Peter turns out to be the leader of this group that finds themselves drawn to Colorado, not knowing what to expect when they get there.   Once they arrive they seem to discover what needs to be done to distinguish the problem with the vampires (which they actually call virals) but now to figure out how to actually get the job done.

From the beginning of the novel we know that Amy is special and her role is clearly visible by the end of the novel.  Peter is the big question mark for me though.  We watched Peter grow as a leader throughout this novel, but by the end it seems that he will have much more to offer in the next segment.  So, I ask...WHAT is Peter?  As much as I enjoyed this book I think it could have been shortened up a bit.  With themes of science fiction, end times, and survival this book will have you on the edge of your seat waiting for the next installment like I am!

Disclosure:  This book was provided to me by Random House in exchange for an honest review.
Posted by Jo-Jo at 7:18 AM

This book sounds fantastic. Thank-you for the great review! It's definitely on my "to-read" list!

I hear only good things, and this book i suer one I want to read...must read

Glad u enjoyed this Jo Jo; it was one I couldn't really get into.

Great review. I can't wait to read this one, but its length has kept me from reading it so far.

I've been on the fence about this one since I don't read much sci-fi either. Your review pushed me a little closer to the read it side of the fence.

I have this book on my TBR shelf...just the size of it intimidates me! I love your review, and it does sound like something I'd like....can't wait to read it now.

I'm glad you liked it. I thought my husband would enjoy it since he likes Stephen King books, but he gave up after about a hundred pages.

And a most honest review it was!

Sounds like a good one and like how you explained the time transistions. I've heard various things. I will definitely pick this up. Thanks jo-jo!

Wow, there's a sequel?! The length of this book has put me off, but I may just consider it. :)

I really enjoyed this book - way more than I thought I would! Great review!

Okay, I didn't read this through all the way, because I'm reading this book right now. I'm a teeny bit lost in chapter four with all the military and patient housing information, but I can tell it's going to pick up steam as soon as the groundwork is set up for us. It does seem really good so far though and I love seeing that other people are reading it at the same time!

I just saw this author speak at a book festival over the weekend. I found it interesting to hear him say that he wrote this in response to a challenge by his then 9 year old daughter to write a story about a girl who saves the world. He said he and his daughter worked together on the outline for the story for several months before he began writing and that the story elements have rarely strayed from that outline. This is the first of 3 total books in what he knew would be a trilogy before he began writing. So looks like you'll have 2 more installments to enjoy!

I don't know if I'll read it. Sounds interesting but it may take me awhile to get to! Great review and nice meeting you at the dinner the other night!

Great review! will probably read, thanks!

Wow, this sounds like a captivating book, one that's difficult to put down! I'm glad to know you enjoyed it. I have it here waiting for me!