Audiobook Review: In Sunlight and in Shadow by Mark Helprin 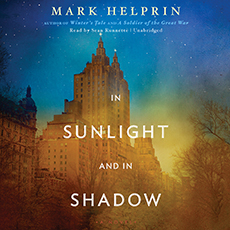 Title:  In Sunlight and in Shadow

Here is a summary of the audiobook from the Blackstone Audio website:

Mark Helprin’s enchanting and sweeping novel asks a simple question: can love and honor conquer all?

New York in 1947 glows with postwar energy. Harry Copeland, an elite paratrooper who fought behind enemy lines in Europe, returns home to run the family business. In a single, magical encounter on the Staten Island ferry, the young singer and heiress Catherine Thomas Hale falls for him instantly, but too late to prevent her engagement to a much older man. Harry and Catherine pursue one another in a romance played out in postwar America’s Broadway theaters, Long Island mansions, the offices of financiers, and the haunts of gangsters. Catherine’s choice of Harry over her longtime fiancé endangers Harry’s livelihood—and eventually threatens his life.

Entrancing in its lyricism, In Sunlight and in Shadow so powerfully draws you into New York at the dawn of the modern age that, as in a vivid dream, you will not want to leave.

My Review:
Well this is by far the longest audiobook I have listened to yet.  And although I found it difficult at times to want to pay attention, I found it easy to pick up on things later when it got interesting again.  I think Runnette did a great job of narrating, because even when the story didn't have my attention, I still found I wanted to listen to the narrator.  I wouldn't have listened for 29 hours otherwise!

When Harry first sees Catherine, it is love at first sight.  He knows they are meant to be together, but since she is engaged he knows it will be a battle to win her heart.  Harry is up for the challenge as he fights for the woman he loves, and earns her friendship, love and respect.  We have a front row seat to Harry and Catherine's courtship, marriage, and regular life together.  Shortly after their relationship becomes serious, Harry's personal business venture is compromised and he must figure out a way to correct the situation before he loses everything his parents built and passed on to him.

There were so many lines within this novel that made me think, "Wow, that was just beautiful."  Often when I read books I find myself going back and reading parts over again, just to have the chance to pour over those lovely words again.  So there were many times during this audiobook that I wished I had a physical book to do that.

I think my favorite part of the book is when Harry looked up an army friend, Johnson, who happened to live in Bayfield, Wisconsin.  Bayfield is just a little town, probably has a population of about 500 people, located about 30 miles north of me.  So it was fun to listen to him describing the ice cold winters and how difficult it was for Johnson to meet him in Chicago since there isn't much public transportation in Bayfield.  It is still that way up here in Northern Wisconsin.

The novel takes quite a turn when Harry makes the decision to protect what belongs to him.  He spends time formulating a plan in an effort to protect his business.  He is not in a hurry to put his plan into action, as he knows it could even take years for completion.  I did find myself enjoying this story and got rather wrapped up in the ending.  With themes of love, war, and honor this book had much to offer for a variety of readers.  Although I did enjoy the audioversion, I believe I may have enjoyed the physical book more.  I also think book clubs would have a great discussion from this novel.

Disclosure:  This audiobook was provided to me by the publisher through Audiobook Jukebox in exchange for an honest review.

The cover immediately caught my interest and the blurb really sounds like something I'd enjoy but 29 hours??? Good God! That is one long book.

yes..it sounds like a book club book! thank you for this informative review. we are always looking for books to read.

Hi! I have trouble listening to most audio books (unless they are short). I did recently post on Les Miserables and linked it up on Cym Lowell's linky this weekend (which is where I found you). =D

Glad you enjoyed it!