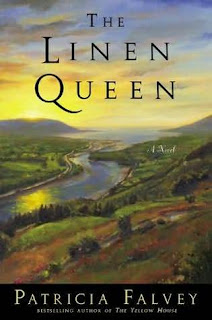 Here is a summary of The Linen Queen from the Hachette website:

Abandoned by her father and neglected by her self-centered, unstable mother, Sheila McGee cannot wait to escape the drudgery of her mill village life in Northern Ireland. Her classic Irish beauty helps her win the 1941 Linen Queen competition, and the prize money that goes with it finally gives her the opportunity she's been dreaming of. But Sheila does not count on the impact of the Belfast blitz which brings World War II to her doorstep. Now even her good looks are useless in the face of travel restrictions, and her earlier resolve is eroded by her ma's fear of being left alone.

When American troops set up base in her village, some see them as occupiers but Sheila sees them as saviors--one of them may be her ticket out. Despite objections from her childhood friend, Gavin O'Rourke, she sets her sights on an attractive Jewish-American army officer named Joel Solomon, but her plans are interrupted by the arrival of a street-wise young evacuee from Belfast.
Frustrated, Sheila fights to hold on to her dream but slowly her priorities change as the people of Northern Ireland put old divisions aside and bond together in a common purpose to fight the Germans. Sheila's affection for Joel grows as she and Gavin are driven farther apart. As the war moves steadily closer to those she has grown to love, Sheila confronts more abandonment and loss, and finds true strength, compassion, and a meaning for life outside of herself.

My Review:
We are given young Sheila's story as World War II gets closer to her small village in Ireland.  Sheila has big dreams of leaving her little town as soon as she gets enough funds together, but she doesn't expect the complications that will arise when she tries to leave now that the war is at her back door.  I think I will start off by telling you that this book fell just a bit short for me.

Although Sheila finds it next to impossible to leave the village, once she wins the Linen Queen competition, certain things are a little easier for her and her family.  She finds herself being invited to special events that many girls couldn't get past the front door.  This allows her the opportunity to meet new people, including Joel, the young soldier from America who has taken a fancy towards her.  As much as I wanted to like Sheila as the main character, I found she annoyed me half of the time.  She did stand up for what she believed in and protected those that she loved, but her relationships with Gavin and Joel drove me nuts!  I couldn't help but think, pick a man already!

Sheila did have a rough family life since her father left her and her mother behind.  Her aunt and uncle were kind enough to take them in, and with the frustrations of the economy her mother was afraid to make any waves in the household in fear they would be on the streets.   So often I couldn't help but think how mean and selfish her mother was, but when she needed help, Sheila was there to support her.

As much as I wanted to love this novel, I just found it dragging on and on for me.  Until I reached at least the half-way point of the book, I just was never excited to get back to reading it.  I also found some of the characters names confusing as a couple were quite similar.  With themes of war, family, and love, you may find more enjoyment from this book than I did.  Even though I didn't love it, I didn't hate it either.  So I do recommend this book for those that love stories about Ireland and I also think it would make an interesting book club discussion.

Disclosure:  This book was provided to me by the publisher in exchange for an honest review.
Posted by Jo-Jo at 7:30 AM

I had high hopes for this book so I'm bummed to see it's so slow.

Well that sucks. I despise books that drag or characters who are loyal to a fault. different times though. Sorry this didn't live up to expectations.

Feel free to visit my blog self esteem quotes

A fascinating discussion is worth comment. I think that
you need to write more about this issue, it may not be a taboo subject but typically people
don't discuss these issues. To the next! Kind regards!!

I absolutely love your blog and find nearly all
of your post's to be just what I'm looking for. Would you
offer guest writers to write content in your case?
I wouldn't mind producing a post or elaborating on a lot of the subjects you write concerning here. Again, awesome web site!

My spouse and I stumbled over here by a different web address and thought I should check things out.
I like what I see so now i'm following you. Look forward to going over your web page for a second time.

Wonderful, what a webpage it is! This website presents
valuable data to us, keep it up.

Woah! I'm really enjoying the template/theme of this site. It's simple, yet effective.
A lot of times it's challenging to get that "perfect balance" between usability and appearance. I must say you've
done a awesome job with this. In addition, the blog loads very fast
for me on Internet explorer. Superb Blog!

Superb, what a weblog it is! This webpage presents valuable information
to us, keep it up.

Very good info. Lucky me I recently found your website by accident (stumbleupon).

I have book marked it for later!

my page: thanks quotes

Hello there! Quick question that's totally off topic. Do you know how to make your site mobile friendly? My weblog looks weird when viewing from my iphone. I'm trying to find a theme or plugin that
might be able to resolve this issue. If you have any
recommendations, please share. Cheers!

Tremendous issues here. I am very glad to see
your article. Thanks so much and I am having a look ahead to touch you.

Will you please drop me a e-mail?

Excellent blog here! Also your web site loads up fast! What host are you using?
Can I get your affiliate link to your host? I wish my website loaded up as quickly as yours
lol

Feel free to surf to my blog post ... mistake quotes

I am in fact glad to read this webpage posts which
contains tons of helpful information, thanks for providing such statistics.

Sweet blog! I found it while searching on Yahoo News. Do you
have any tips on how to get listed in Yahoo News? I've been trying for a while but I never seem to get there! Cheers

I am curious to find out what blog system you happen to be using?
I'm having some minor security problems with my latest blog and I would like to find something more safeguarded. Do you have any recommendations?

Stop by my web-site - struggle quotes

It is the little changes that make the most important changes.
Thanks for sharing!

I just like the helpful info you supply in your articles.
I'll bookmark your weblog and take a look at once more here frequently. I am quite certain I will be told many new stuff right here! Best of luck for the following!

Pretty nice post. I just stumbled upon your weblog and wished to
mention that I've truly enjoyed surfing around your weblog posts. After all I'll be subscribing in your feed and I hope you write again soon!


Have a look at my blog hatred quotes

Hello to every , as I am truly keen of reading this weblog's post to be updated on a regular basis. It contains fastidious stuff.

I'm amazed, I must say. Rarely do I encounter a blog that's both
equally educative and amusing, and let me tell you, you've hit the nail on the head. The problem is an issue that too few people are speaking intelligently about. I am very happy that I found this during my hunt for something concerning this.

A fascinating discussion is definitely worth comment. I believe that you ought to
publish more about this topic, it might not be a
taboo subject but usually people don't discuss such subjects. To the next! Best wishes!!

Hi there Dear, are you genuinely visiting this site regularly, if so then you
will without doubt get fastidious experience.

Great work! That is the type of information that should be shared around the net.
Disgrace on Google for now not positioning this put up upper!
Come on over and seek advice from my site . Thanks =)

I enjoy what you guys are up too. This kind of clever work and reporting!
Keep up the superb works guys I've added you guys to blogroll.

A person essentially assist to make severely posts I might state.
This is the very first time I frequented your website page and up to now?

I amazed with the analysis you made to create this actual publish incredible.
Magnificent task!

Thank you for another informative site. The place
else may just I am getting that type of information written in such an ideal means?
I've a mission that I am just now running on, and I've been on the glance out for
such info.

There's certainly a great deal to know about this issue. I really like all the points you have made.

Paragraph writing is also a excitement, if you be familiar with afterward you can write or else it is difficult to write.


Feel free to surf to my web-site: sylvia plath quotes

I wanted to thank you for this great read!! I absolutely enjoyed every little bit of it.
I've got you book-marked to check out new stuff you post…

Feel free to surf to my blog; commitment quotes

Good day! This is kind of off topic but I need some advice from an established blog.

Is it very difficult to set up your own blog?
I'm not very techincal but I can figure things out pretty quick. I'm thinking about setting
up my own but I'm not sure where to start. Do you have any tips or suggestions? Cheers

I'm gone to say to my little brother, that he should also go to see this web site on regular basis to get updated from hottest information.