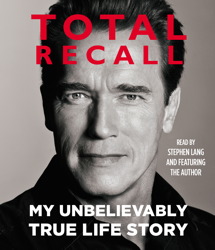 His story is unique, and uniquely entertaining, and he tells it brilliantly in these pages.

He was born in a year of famine, in a small Austrian town, the son of an austere police chief. He dreamed of moving to America to become a bodybuilding champion and a movie star.

By the age of twenty-one, he was living in Los Angeles and had been crowned Mr. Universe.

Within five years, he had learned English and become the greatest bodybuilder in the world.

Within ten years, he had earned his college degree and was a millionaire from his business enterprises in real estate, landscaping, and bodybuilding. He was also the winner of a Golden Globe Award for his debut as a dramatic actor in Stay Hungry.

Within twenty years, he was the world’s biggest movie star, the husband of Maria Shriver, and an emerging Republican leader who was part of the Kennedy family.

Thirty-six years after coming to America, the man once known by fellow bodybuilders as the Austrian Oak was elected governor of California, the seventh largest economy in the world.

He led the state through a budget crisis, natural disasters, and political turmoil, working across party lines for a better environment, election reforms, and bipartisan solutions.

With Maria Shriver, he raised four fantastic children. In the wake of a scandal he brought upon himself, he tried to keep his family together.

Until now, he has never told the full story of his life, in his own voice.

Here is Arnold, with total recall.

My Review:
I don't know what it is, but something about Arnold Schwarzenegger has intrigued me for as long as I can remember.  Since I've never been attracted to the muscular bodybuilder types, I knew it wasn't a physical attraction, but maybe more of an appreciation of the person he is.  He has been through a lot since he arrived at the United States and claimed the title of Mr. Universe.

I usually try to stay away from abridged audiobooks, but I think for those that are not avid bodybuilders, this is the way to go with this one. Arnold shares many of his life stories, starting with his childhood in Austria and even divulging the huge mistake he made when he cheated on Maria.

Arnold grew up with a very strong work ethic and I was impressed to learn what a goal setter he truly is.  It made me reflect on my own goals and realizing although I strive for personal goals, it has been a long time since I sat down and physically wrote my goals on a piece of paper.  This has been a regular habit for Arnold since he became a serious bodybuilder.  Every New Year he would try to set new goals for himself  that would make him a stronger and better person.  I am definitely not unfamiliar with goal-setting, but it was just a great reminder.

I enjoyed the narration of this book.  Arnold started the first couple of chapters and ended the book by reading the last couple of chapters.  Stephen Lang read everything in between and did a great job.  As I mentioned, I really am not a fan of bodybuilding, but I found myself wanting to hear what he had to say about the subject.  Arnold is obviously a man who had to overcome many obstacles to make it where he is today, and I think that can only be called success.

Those that are bodybuilders will probably enjoy this book more than I did, and would benefit from listening to the unabridged version.  With themes of goals, dreams, fitness, and politics, this turned out to be a memoir that I enjoyed more than I expected.  I think this book would be a great selection for either personal leisure or a book club selection and I don't hesitate in recommending it.

Disclosure:  This audiobook was provided to me by the publisher through Audiobook Jukebox in exchange for an honest review.
Posted by Jo-Jo at 7:30 AM

Too bad his marriage is still shattered and his new movie is not a success. But it looks like his book is a winner. Nice review.

I've never been a big fan of Schwarzenegger's so this may not be for me.

I've got a lot of memoirs etc. lined up for this year, and thought about adding this book. Your review makes me want to read it more, so if I have time, I'll add it.

things hard to build, difficult to replace, and costly to
substitute. It is move to make the Pizza Ordering experience more convenient and fun for a large and fast growing population of Netizans in India.
Subway is the largest sandwich franchise in the world, with 30,476 franchises in 87 countries.


my homepage; check this out

There are so many ways to use brick, block, slabs, rocks, gravel and other stone
formations. If you have lower defence you can survive as well, but it won't be as easy. Once the timeframe reaches 0 to X minutes, the star is about to land.