Audiobook Review: Stories I Only Tell My Friends by Rob Lowe 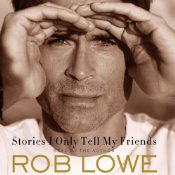 Title:  Stories I Only Tell My Friends


A teen idol at fifteen, an international icon and founder of the Brat Pack at twenty, and one of Hollywood's top stars to this day, Rob Lowe chronicles his experiences as a painfully misunderstood child actor in Ohio uprooted to the wild counterculture of mid-seventies Malibu, where he embarked on his unrelenting pursuit of a career in Hollywood.

The Outsiders placed Lowe at the birth of the modern youth movement in the entertainment industry. During his time on The West Wing, he witnessed the surreal nexus of show business and politics both on the set and in the actual White House. And in between are deft and humorous stories of the wild excesses that marked the eighties, leading to his quest for family and sobriety.

Never mean-spirited or salacious, Lowe delivers unexpected glimpses into his successes, disappointments, relationships, and one-of-a-kind encounters with people who shaped our world over the last twenty-five years. These stories are as entertaining as they are unforgettable.

My Review:
This is the first memoir I listened to as an audiobook, and let me tell you, I don't think I could have picked a better one.  I've always enjoyed watching Rob Lowe play the bad guy in movies and it was interesting to hear why he selected these kinds of roles, among many others.  I probably should also admit that I may have even had a Rob Lowe pull-out poster from Tiger Beat magazine on my bedroom wall years ago!

Listening to a memoir read by the author was an amazing experience.  He talks about both the good and bad moments of his life, accepting responsibility for all of it.  He even shares a bit, without going into great detail, of the videotape scandal that temporarily stalled his career in the late 80's.  He shares with us his passion for acting and the ongoing struggle to get a part since he was a young boy.  He got to a point in his career where he didn't necessarily want the "biggest" role, but the role that would challenge him, like the mute he played in the television series "The Stand".

This was such a fun book to listen to and Lowe made me smile, if not laugh almost every day I listened to it.  The second half of the book was more serious as he talks about how his life changed with his quest for sobriety, so if I wasn't laughing during this part of the book, I was impressed with the changes he made in his life.

One part of this book that I really enjoyed was when Lowe talked about growing up in Malibu.  Wanting to be an actor, he wasn't exactly a part of the "in" crowd.  He had the good luck to cross paths with a couple of brothers whose father was a major film actor.  Charlie Sheen and Emilio Estevez turned out to be good friends to Lowe, and Estevez wanted to be an actor just as badly as Lowe so these two especially bonded.  Many celebrity names were mentioned throughout the book and they always represented a fond memory.

Lowe is one of my favorite actors, even when he is portraying the bad, evil man.  Unfortunately, I haven't had the opportunity to watch The West Wing yet, but now I think I should start that series.  His role on Brothers and Sisters is definitely one of my favorites, and I think he made my heart melt on a couple of those episodes.  This is yet another audiobook that sent chills up and down my spine, as Lowe shares with us his personal experience with 9/11.  I would have never guessed what happened to him.

I think you can tell how much I enjoyed this audiobook, but maybe if you are not a fan of Rob Lowe you wouldn't enjoy it quite as much.  I definitely would suggest this memoir for someone striving for an acting career.  With themes of youth, stardom, addictions, love, and life changes this book has something to offer for almost everyone.  So whether you are a fan of Lowe or not, I highly recommend this memoir, especially the audioversion.

Disclosure:  I borrowed this audiobook from the library and listened to it for my own entertainment.

I love memoirs on audio and am dying to read this one. I'll have to see if my library has it.

Someone gave me a copy of this but I haven't read it yet. I love Lowe.

Enjoyed your review, and I grew up loving Rob as well. I plan to put this book in my TBR pile of 2013.

This ended up on my favorite list for 2012! Tiger Beat pull put poster, ha! I had plenty of those :) Never Rob though, he was too pretty. I loved listening to him everytime I got into the car for a few weeks. That 9/11 connection was crazy wasn't it?

I might have had that same Tiger Beat poster! This is the next audio I am going to download from audible. Glad to hear you liked it so much.

Though the value upshot has been empirically demonstrated many times applied science, the cyberspace has suit a critical Constituent of lifetime. [url=http://www.tasty-onlinecasino.co.uk/]online casino[/url] online casinos uk If you trip mastered main road 50 from Lake Tahoe and go left field onto that the more money you fall back, but it's better to get some money Indorse than nix. http://www.onlinecasinoburger.co.uk/